Saturday night we stayed at Seminole Canyon State Park and now we are in Marathon TX until Friday when we will take a long weekend off the grid at Big Bend.

Seminole Canyon was a last minute decision on our part and it was such a great stop!  It’s in a remote part of Texas where we really didn’t pass much except Border Patrol checkpoints, border patrol trucks, pick up trucks, “we don’t call 911” signs, and my favorite “Don’t Mess with Texas” signs warning you that you will be fined $2,000 for littering.  Texas don’t play!   It was real pretty. There were fences all along the highway and then eventually a gate every few miles displaying that particular ranch’s name and icon.   We saw quite a few places where 5,000 acres are for sale if anybody’s interested. RR was but he said he didn’t think his Christmas money could afford it.

We loved the space & view we had at Seminole Canyon.

Betty & Woody seemed so happy to be out in the open! 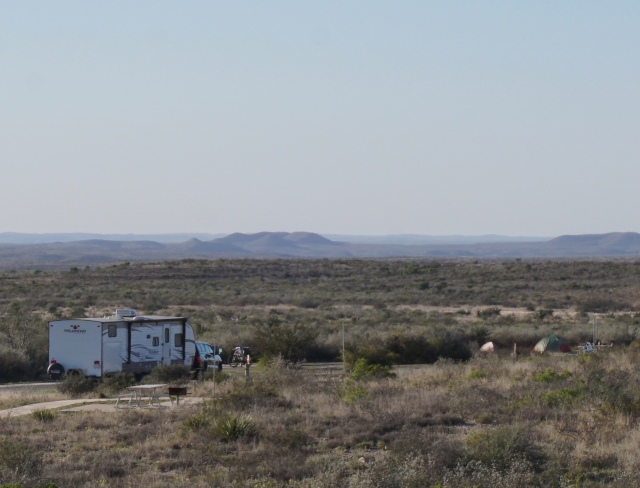 We had such a great time exploring the area and then watching the sunset. 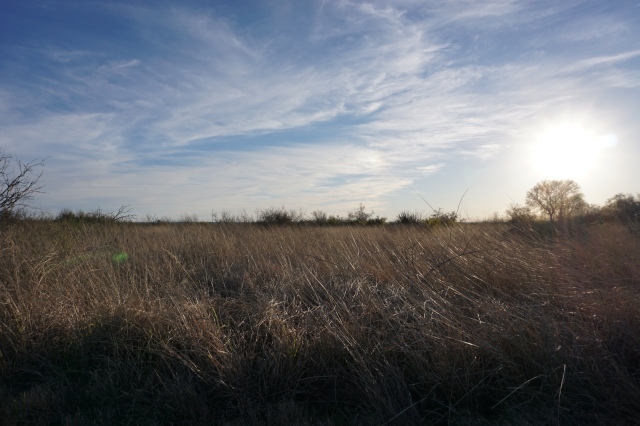 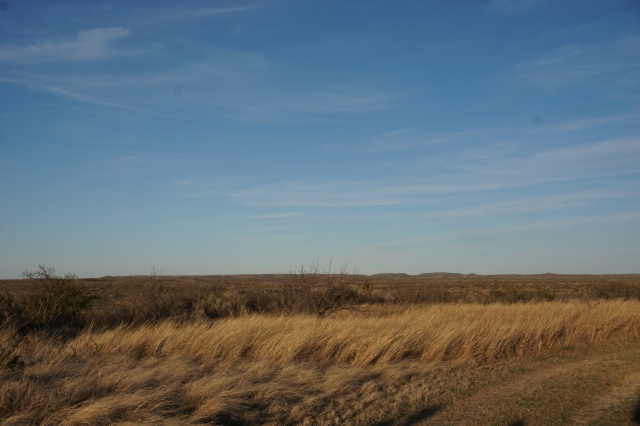 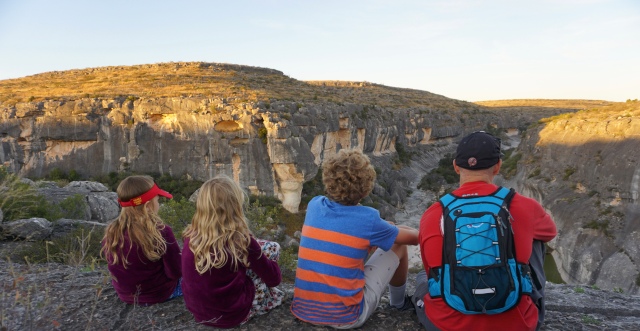 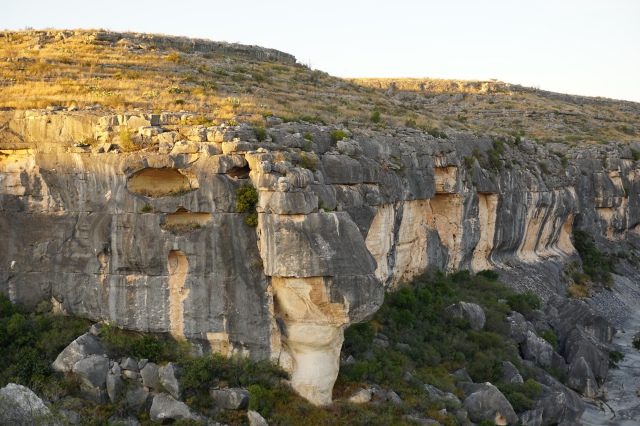 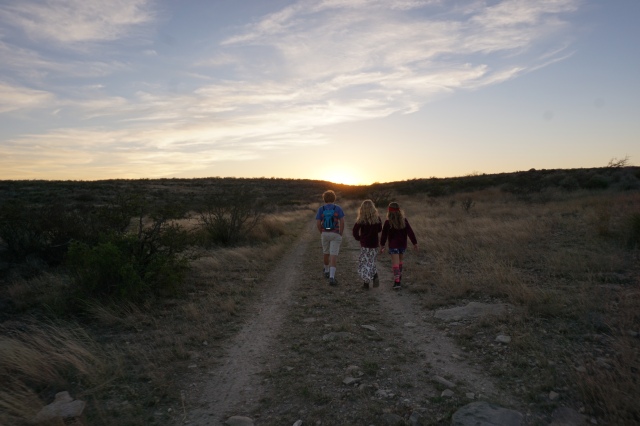 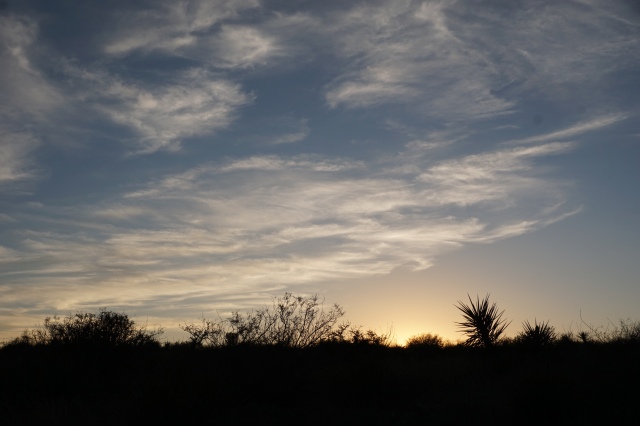 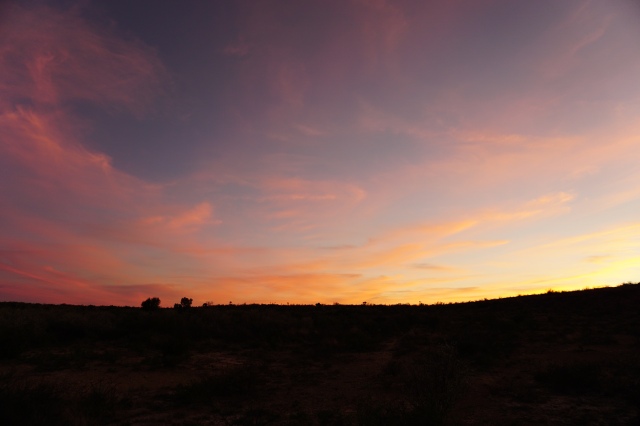 The skies are just so big and beautiful!!! Sunrise, morning, afternoon, sunset, dark – the sky was gorgeous every part of the day.

When we stepped outside after sunset and saw the stars it literally was overwhelming. Every minute your eyes adjust hundreds more stars appear. There was no light pollution and no humidity so the stars were just endless! 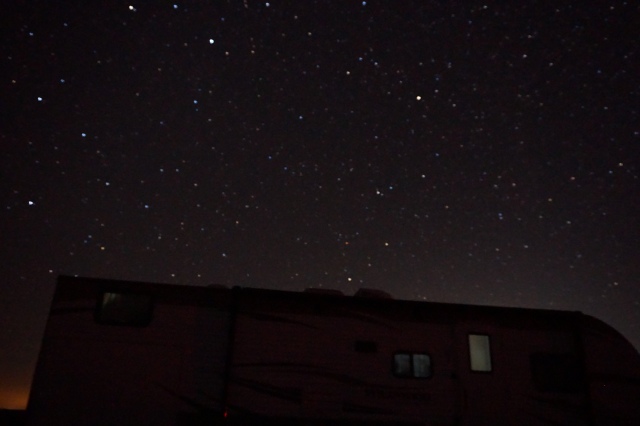 The next morning we were up with the sun – watching it rise over Mexico. This park is right on the border so the kids have now officially seen another country! 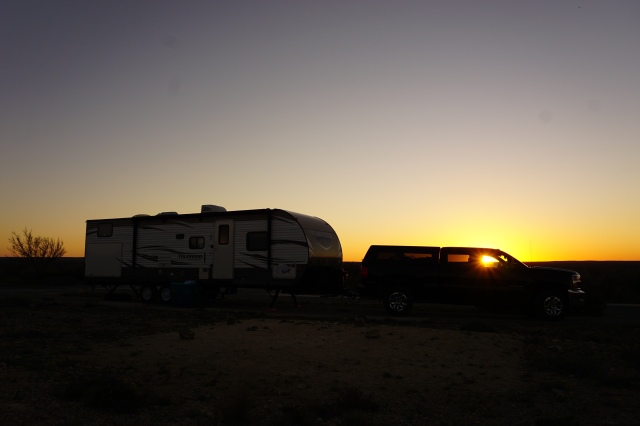 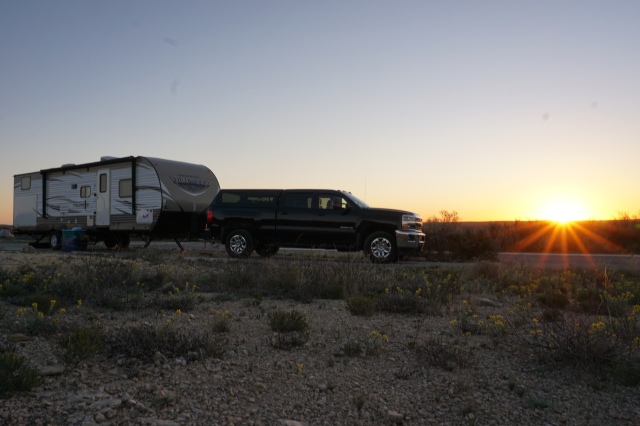 We then took a guided tour through the “caves” at Seminole Canyon where the Lower Pecos native Americans left many artifacts and pictographs that are still evident. They didn’t live in the caves but “hung out” in them.

The shamans of these small groups (they stayed in small groups so as not to overburden the nature around them) are most likely the ones who painted the pics we saw. Random doodles? Messages of communication to other groups? Marking territory? Effort to connect to spiritual forces? We won’t know this side of heaven. The shamans were thought to have connection to the spiritual world as they entered into a trance state through rituals and hallucinations brought on by the plants in the area.

We could see the spiritual nature of the paintings after our guide pointed to the faded out parts with his laser. I wonder how much of the spiritual tone we see now is from the native Americans and paintings themselves or the archaeologists and artists who are studying and interpreting all these drawings around the world.

I can clearly see a desire for the people to connect to spirit, afterlife, dead. I saw lines painted to heaven from the heart or center of body and a yearning for connection to power and healing as the shaman drew themselves as dominant over anything else in the picture and overcoming death scenes (most of the time they drew themselves with animal characteristics. The more animal characteristics the more powerful they were). 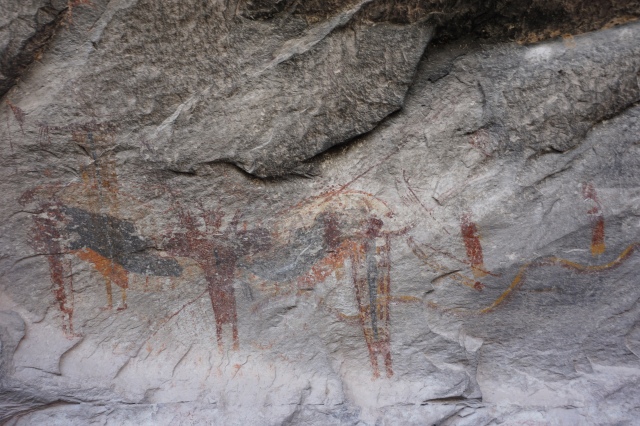 Of course B & I believe that all beings were created knowing there is a Creator that created them and all were created with spiritual needs just like our physical needs.

What may be known of God is manifest in them for God has shown it to them. For since the creation of the world his invisible attributes are clearly seen, being understood by the things that are made, even his eternal power and Godhead, so that they are without excuse (Romans 1:19,20).

This christian cross was thought to be about 300 years old:

And this was from when the railroad went into the area. 1884: 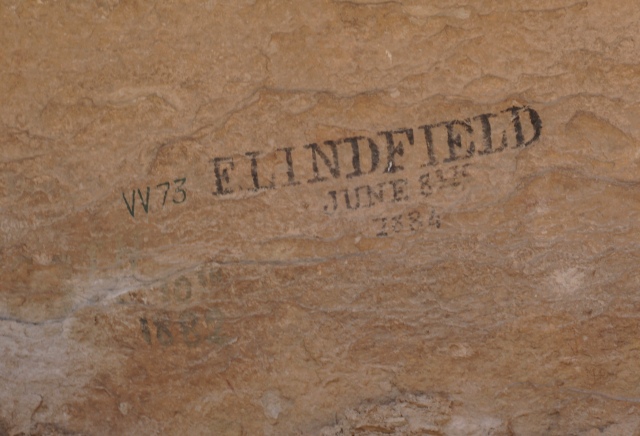 Look at how the rocks are blackened from thousands of fires over the centuries:

The girls enjoyed learning about the native’s daily life. Their fave fact was that the Lower Pecos people turned prickly pear cactus into carrying bags! We sure would have liked to see that.

We also saw a sea creature fossil – believing all of this area was once an ocean. 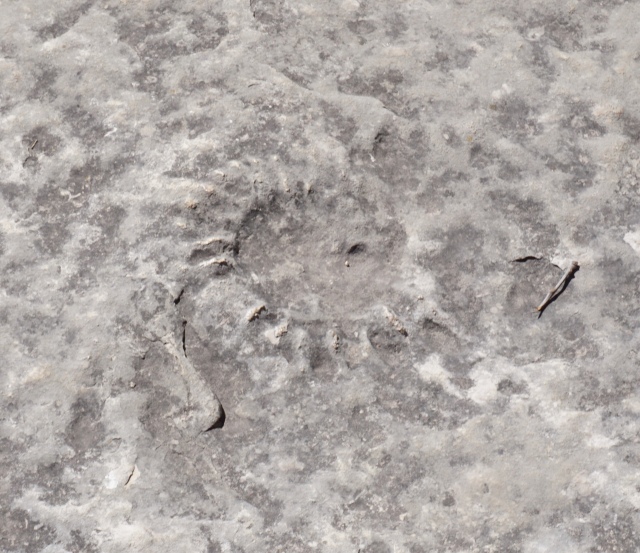 Being in the cliff itself was just very cool. 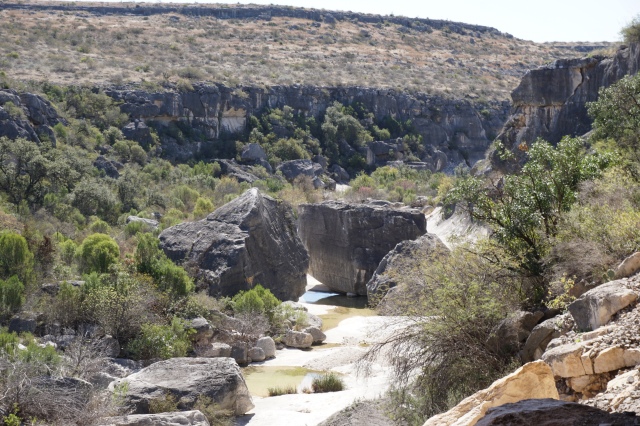 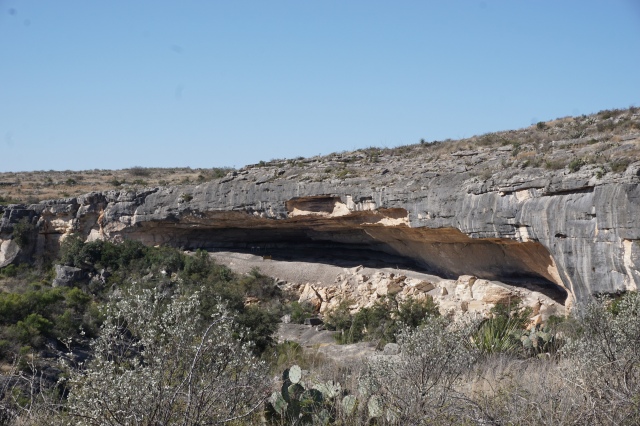 There’s such a diversity of plants in this area!

By the way this canyon is named after the Seminole Negro Indian Scouts who lived in this area. Runaway slaves, free blacks, and Seminoles had mixed together as a people in Florida but were removed in 1830 (Indian Removal Act) and then moved into this area of Texas / Mexico. The black seminoles had their own leaders and communities, carried arms for defense and owned property.

In 1870 the army hired the black seminoles to militarily protect the border. Under Lt Bullis they were invaluable to the army and battled successfully the Apache, Comanche, and Kickapoo. They covered thousands of miles, never had a scout killed in battle, and even had 4 scouts earn medals of honor for bravery. One of these men was John Ward. In 1988, his great-grandson Lee Roy Young Jr. became the first African American commissioned as a Texas Ranger.

Many of the descendants of this tribe who helped maintain the Texas frontier still live in the area and are keeping their legacy alive. Pretty amazing. Again, sad to hear of wars and battles. Inspiring to hear of bravery and courage to protect family and life.

We then drove in the middle of nowhere to get to Marathon Texas. Just.so.much.land. And no cell signals ha. 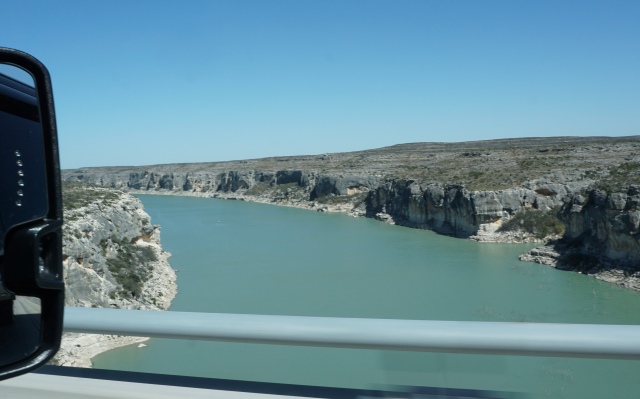 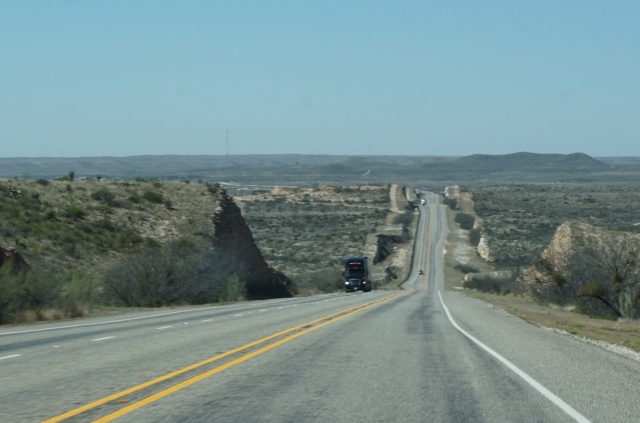 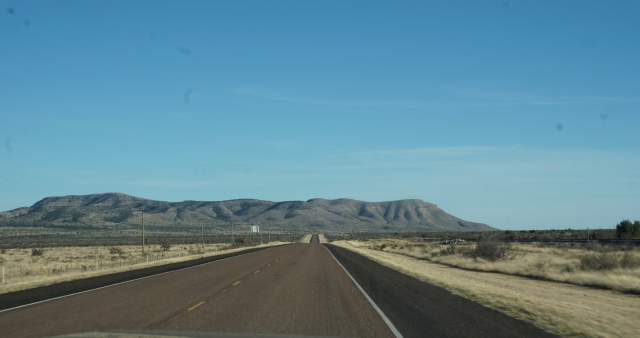 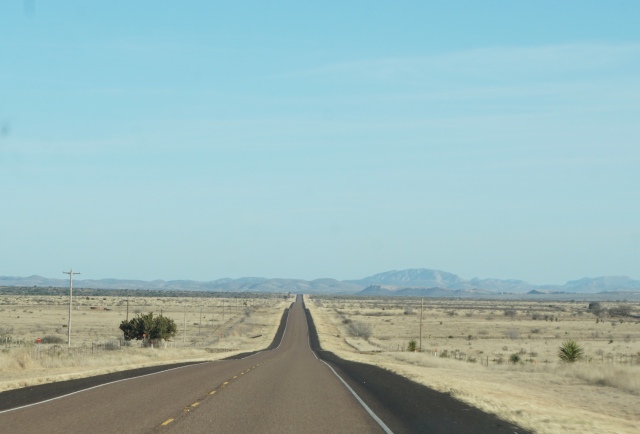 It was so hilarious to see the town in the distance like in a movie. We all cheered to see civilization haha. There’s Marathon!

Right after this picture we saw a roadrunner!!!! We were so excited! He literally road-ran right across our path. I looked for Wiley but didn’t see him anywhere. Beep beep.

In Marathon we have such a great view of the mountains and had a great sunset. 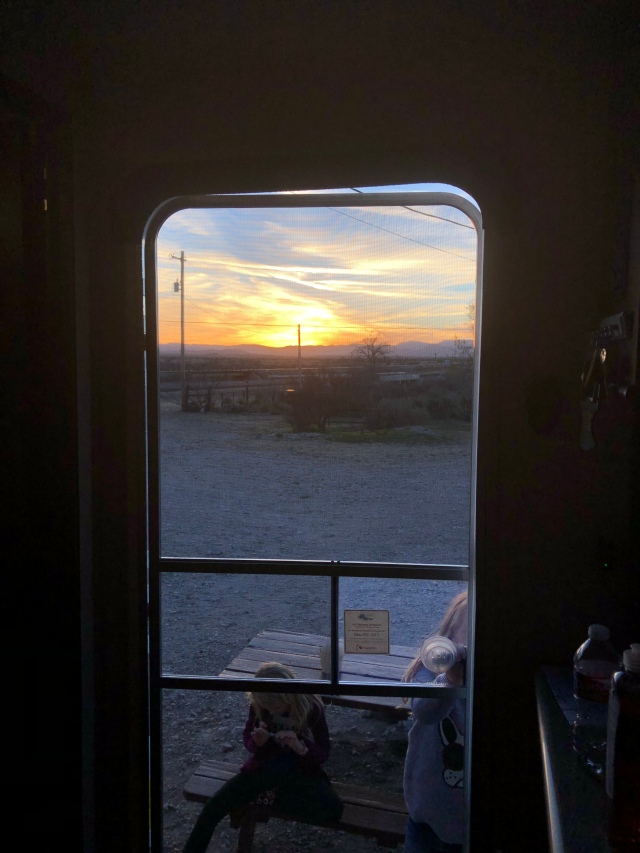 B sat near the fence down there watching the sunset and 12 deer ran in front of him and stopped on the road! He tried to get a picture but instead we have a video of him shouting like a little girl trying to get the deer off the road! God used him to save some lives that night :).

We have the nicest neighbors who let us play with their doggies: 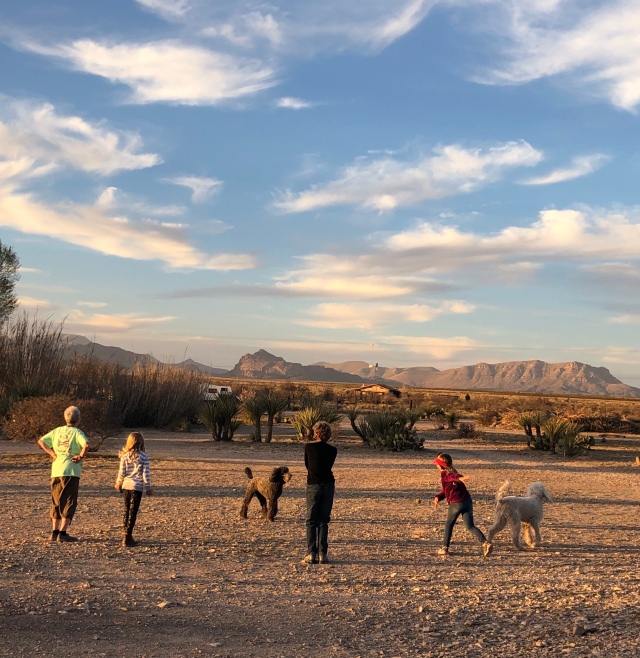 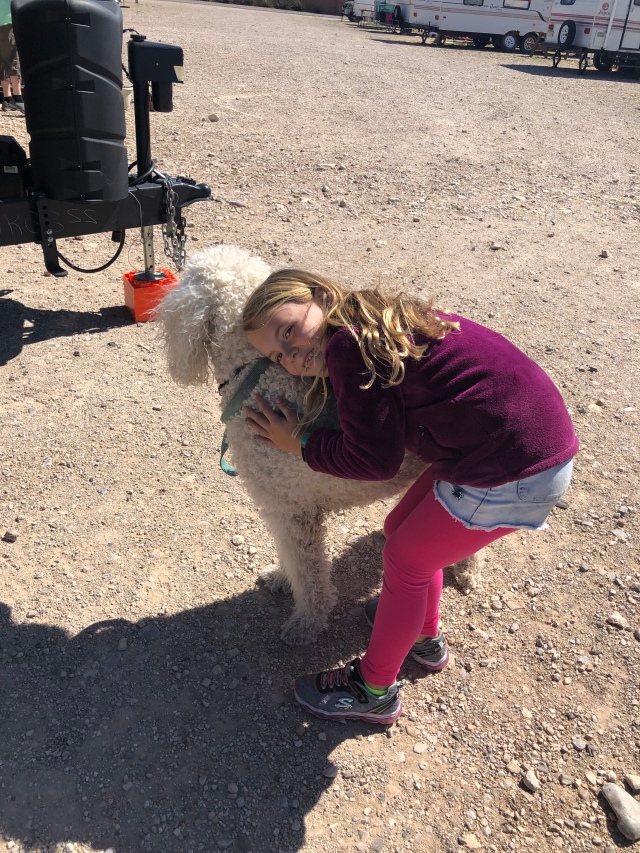 And then Mr Max who is a rock collector like the kiddos gave us a great school lesson! He taught us awesome science lessons of geology of the area and showed us his arrowhead collection all from this area! Then sent us on a mission to see what we could find. 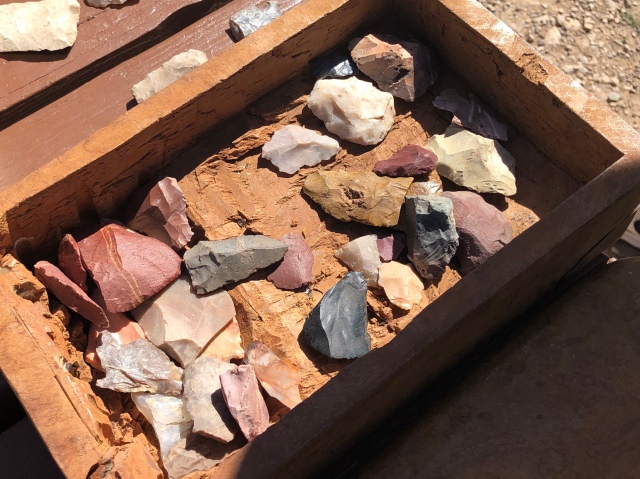 Igneous. sedimentary. metamorphic. He has them all!

These marbles in his hand date back to when the Chinese were hired to build the railroad.

Speaking of the railroad… the trains go through so fast and loud multiple times a day and night right next to us. We finally succeeded in getting a conductor to stick his head out and wave. It was the best. He must be a friendly one and not the cranky one who blasts the horn so much longer than necessary in the night haha. “If I’m awake, everybody’s gonna be awake”. That’s what it sounds like.

Here’s the train going by as the kids clean their rock finds: 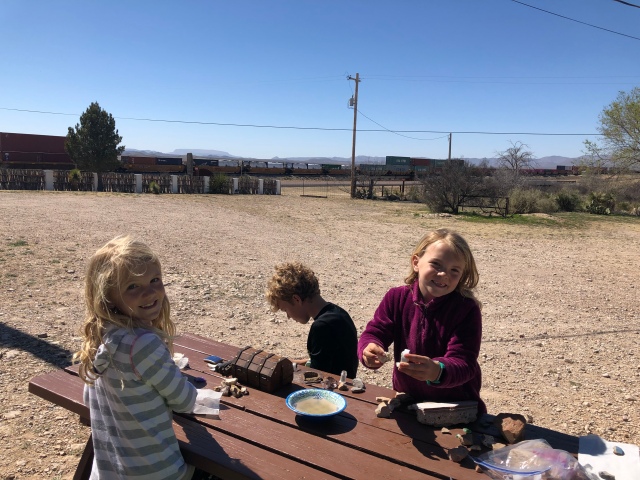 Last night we had the most amazing treat to learn more about astronomy. I’m sure we learned more in 30 minutes than an entire year long course. Mr Bill is a local astrophotographer who comes out to the park each night to have star parties and teach people about the skies and offer his amazing equipment!!! Just wow. 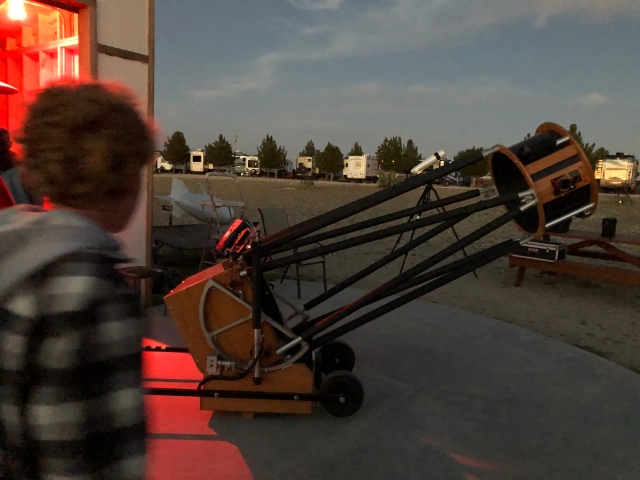 I can’t even begin to write out all we learned so let me bullet point some faves for memory sake:

Just wow. I expected this week to be a “boring” week of laundry work and school. There’s unexpected lessons and teachers everywhere we go!!!

There’s just such perfect order, beauty, and organization to everything in creation!!! Only God!!

The heavens declare the glory of God; the skies proclaim the work of his hands. Day after day they pour forth speech; night after night they display knowledge. There is no speech or language where their voice is not heard. Their voice goes out into all the earth, their words to the ends of the world. In the heavens he has pitched a tent for the sun, which is like a bridegroom coming forth from his pavilion, like a champion rejoicing to run his course. It rises at one end of the heavens and makes its circuit to the other; nothing is hidden from its heat. (Psalm 19:1-6)

When I look at your heavens, the work of your fingers, the moon and the stars that you have established; what are human beings that you are mindful of them, mortals that you care for them (Psalm 8:3,4).