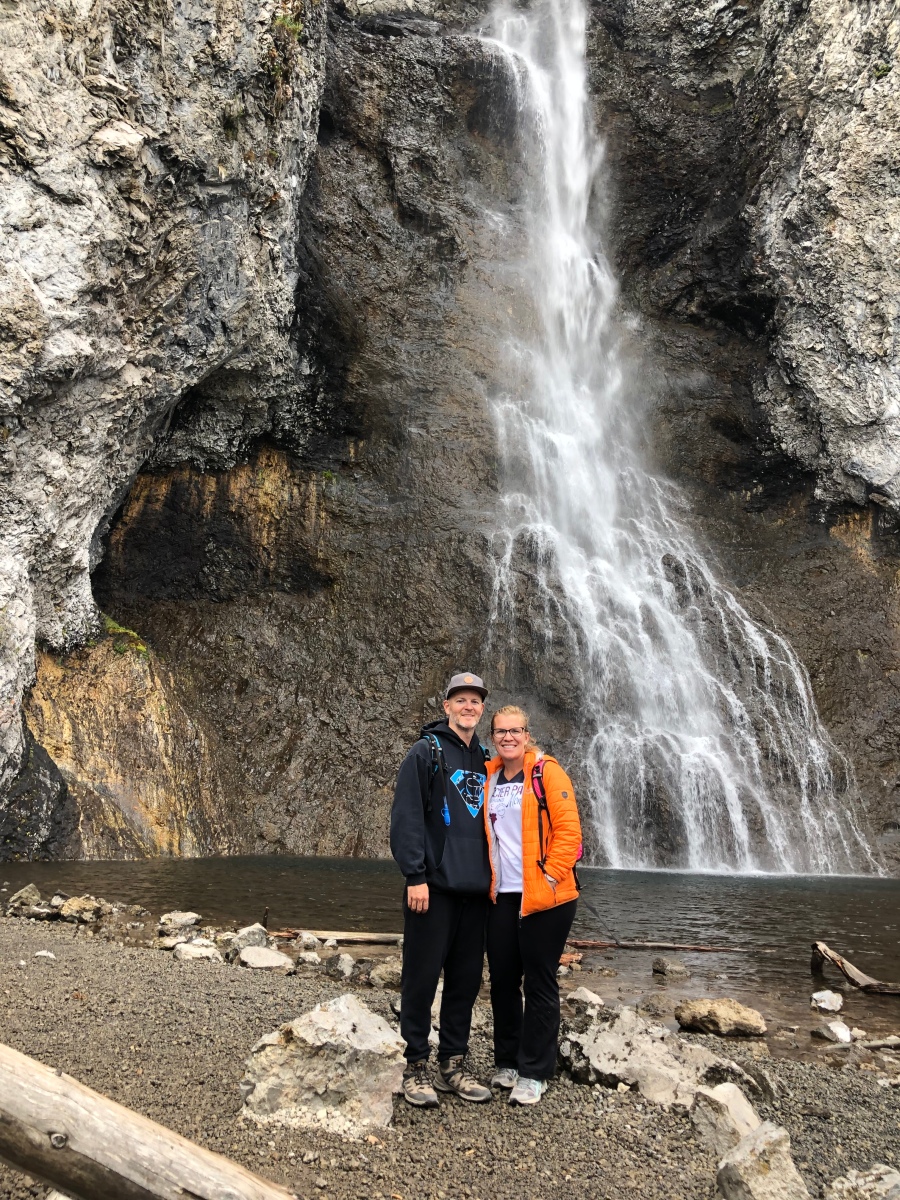 We love all the waterfalls we have seen at Yellowstone! The upper and lower falls were truly so beautiful and some of the most amazing views we’ve ever seen. Last week we also saw Gibbons Falls, Firehole Falls, and Fairy Falls. We haven’t seen Mystic Falls or Tower Falls which are some other popular ones we hope to get to.

Gibbon Falls is right on the Grand Loop on the west side: 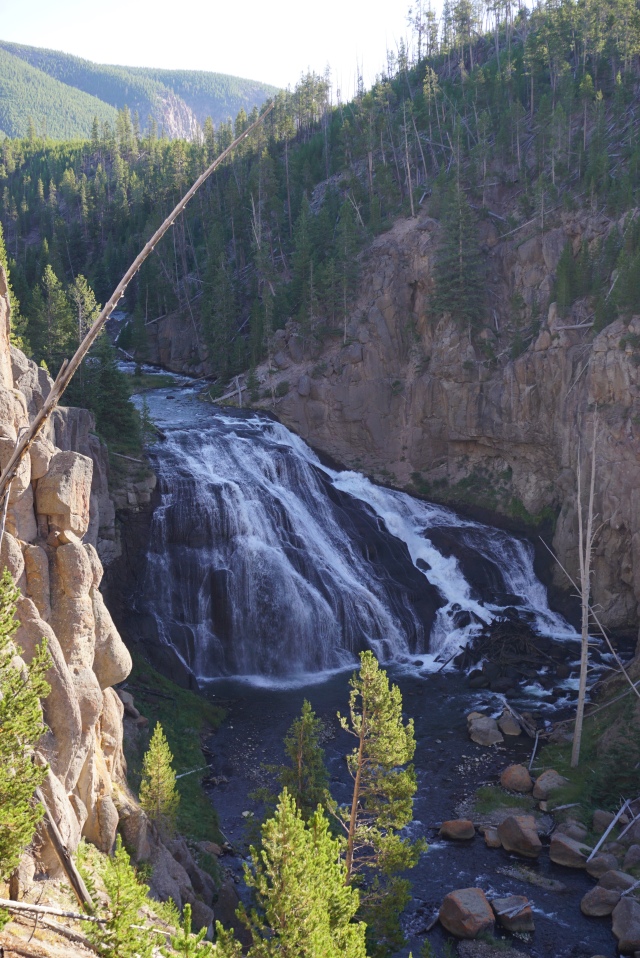 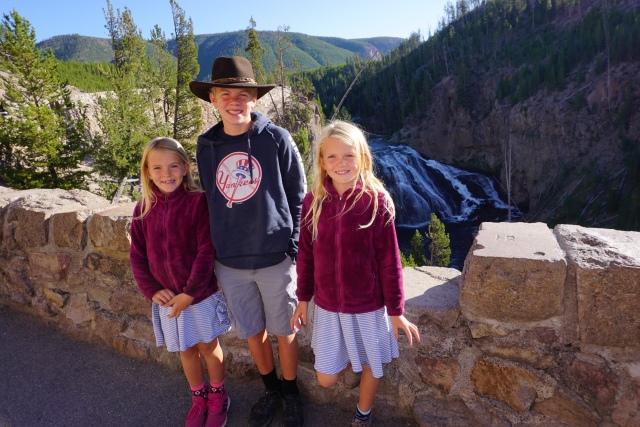 Firehole Canyon is also right by the west entrance (on Firehole Canyon Drive side road) and one of the only places in the park you can safely and legally swim! We didn’t have enough time to stop and stay long (and now it’s too cold!) but we did dip our legs in the water and it felt great. I wanted to jump in so bad but we had other plans. 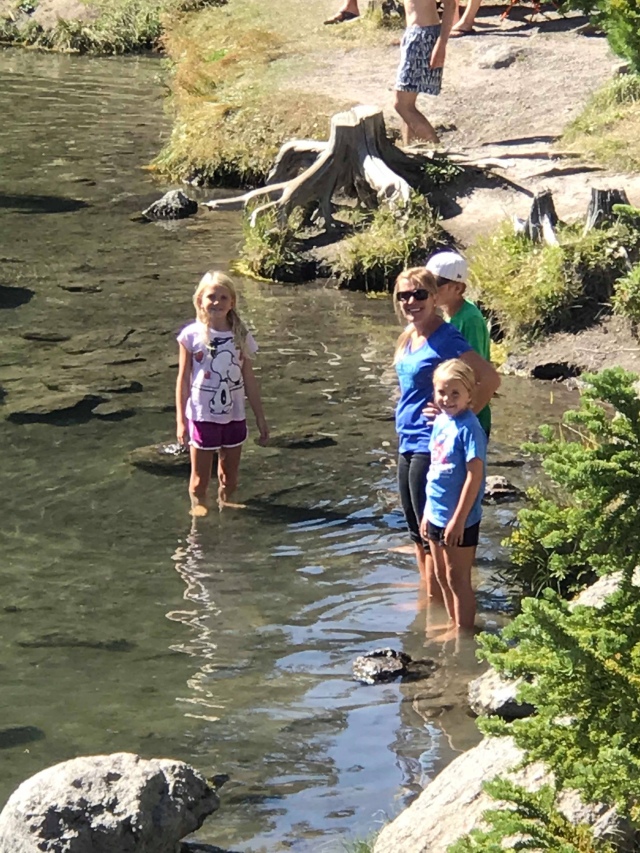 This next one really isn’t a waterfall but it sure is a lot of water falling! At Midway Geyser Basin, where Grand Prismatic is, there’s a massive crater formed by the now retired Excelsior Geyser. Wow this thing is huge! 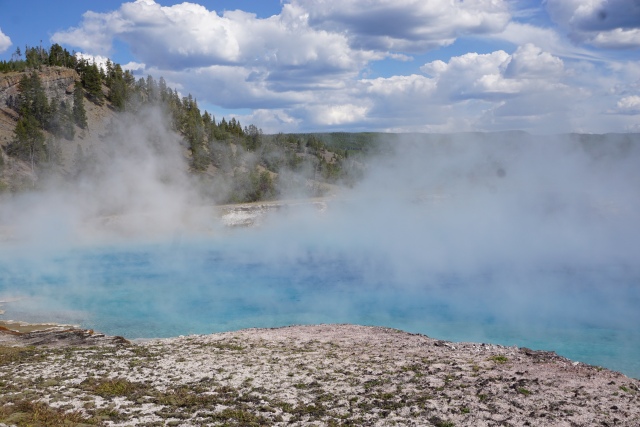 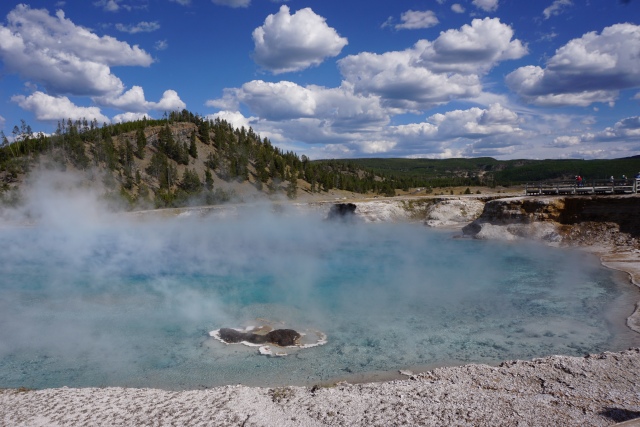 It was dormant for 80+ years but then in 1985 it erupted with such a massive blow that all its plumbing broke and created this huge crater. It now dumps 4,000 gallons of 200 F water per minute into the Firehole River (which is what we waded into much further down stream!). I have to clarify that I’m absolutely sure that’s correct. 4,000 gallons a minute. Isn’t that a ridiculous amount of water!? I have been completely mind-blown by how much water these geysers pour out. (More on this in a later post when we share about Steamboat!) 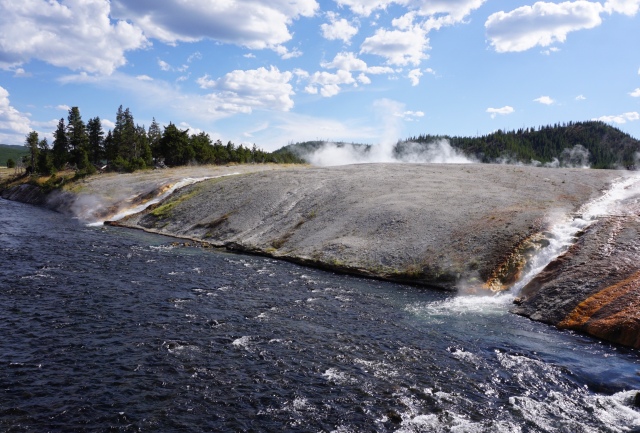 While MM & Pa were here B and I took the chance to have a date night! We chose Fairy Falls so he could see the Grand Prismatic Spring from above. I didn’t bring my camera because it was raining but I did have my cell. As soon as we got on the trail this bison (below) was parked at the bridge so we had to wait for him to mosey on! It still felt way too close for comfort as we finally were able to walk past him to cross the bridge. But I wasn’t so uncomfortable that I couldn’t take a selfie. Sorry Jen 😊. 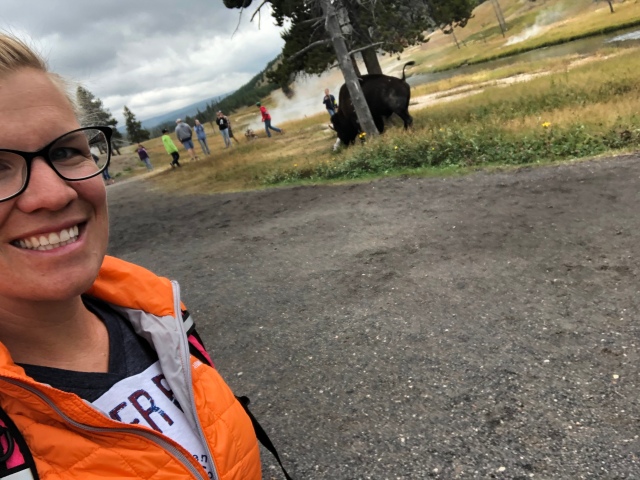 But I was probably the furthest person away in the whole crowd! I never would get as close as these people:

I just shrug and remember what one ranger voiced to us as we discussed some of what we’ve seen in the parks. “We give all the warnings we can but ultimately every citizen has the right to enter the national parks and get themselves seriously injured”.

So there you go.

Here we are at the overlook: 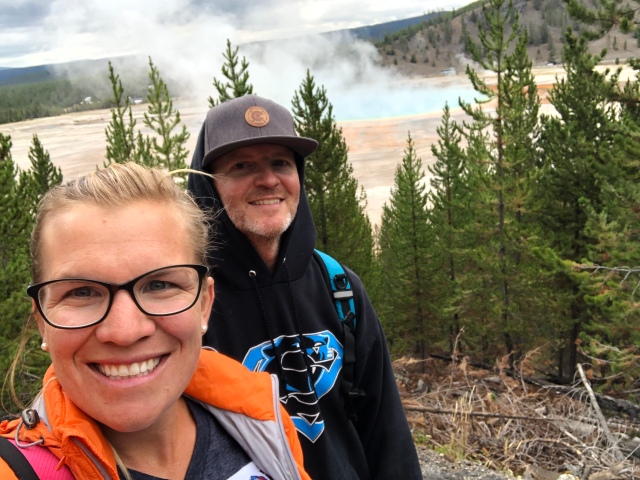 We loved being together!!!

The Falls were great and the hike was so quiet. We finally figured out how to get away from the crowds in Yellowstone: go on trails that are more than a couple of miles long! 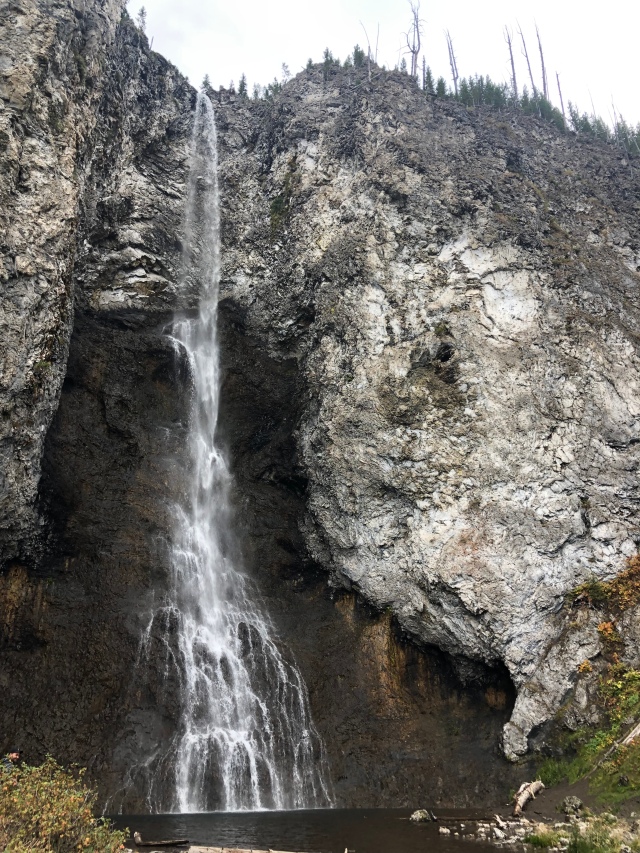 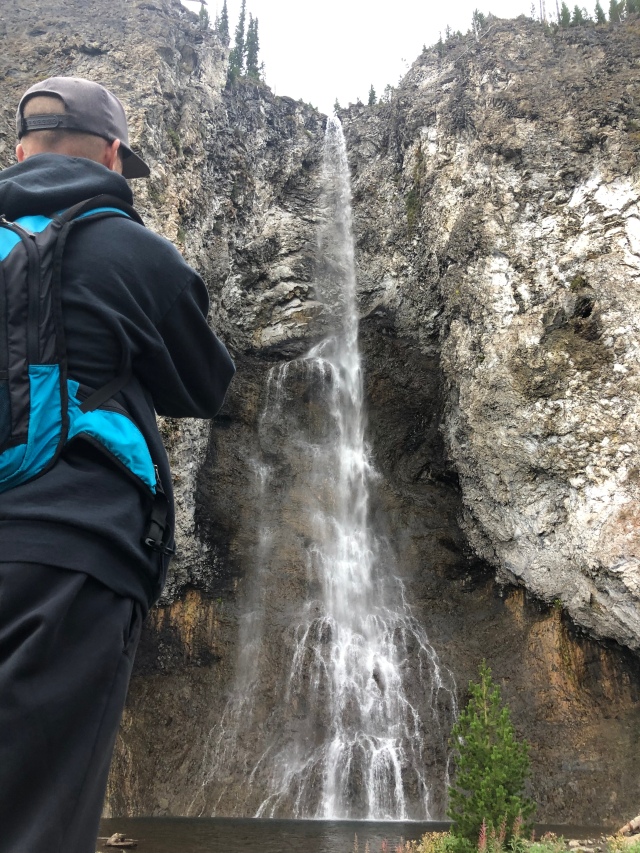 We heard that if we kept going past the falls, we would come to a geyser in the woods. This fountain geyser was soo cool! It kept erupting every 30 seconds or so. 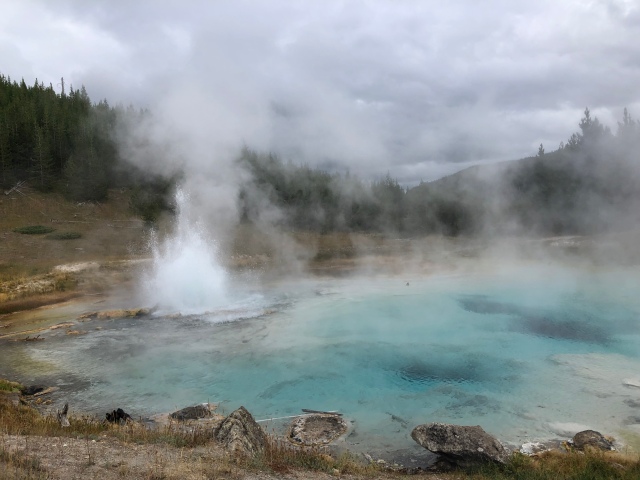 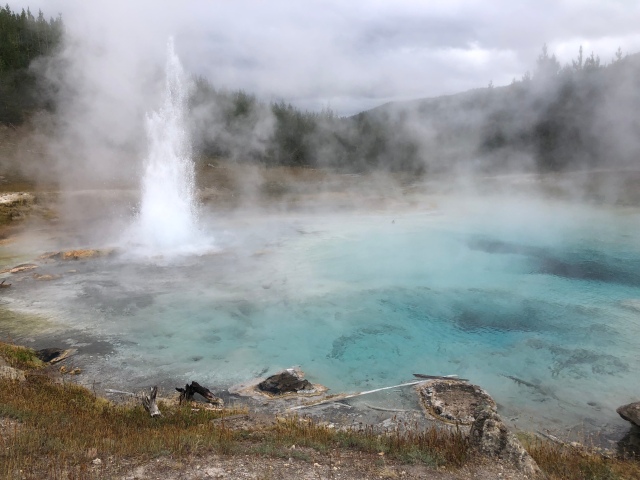 As we sat there I had my first feeling of “wow it’s a little too quiet out here” and I started feeling like something might creep up on us as we stood there with our backs to a valley and mountain side. Then the clouds started rolling in more so we didn’t stay long. On the way back, it started raining on us pretty good and we only passed 2 other people the whole hike back. It finally stopped raining and I snapped some pictures of the trail because I loved how peaceful and quiet it was and that it was starting to look like fall: 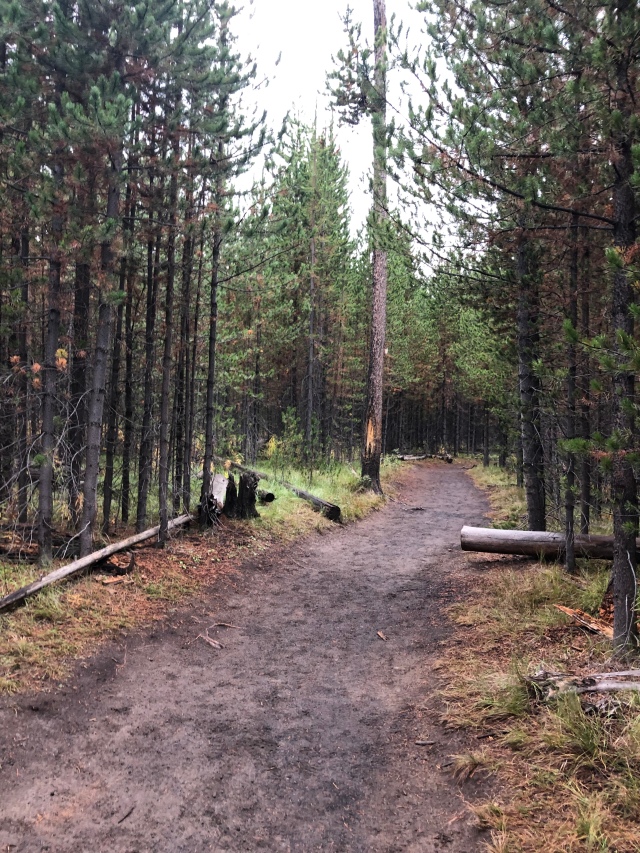 B was talking about work. We were just thoroughly enjoying the quiet (first mistake).

All of a sudden, I caught movement ahead of us to the right. I grabbed B and said what’s that!? I thought it was a deer. It was very light tan. But then I saw a long tail! I thought maybe it’s somebody’s loose dog!? The next thing I know Brandon’s ducking down trying to see better under some branches in front of him and all I saw after that was his butt as I cowered behind him! My instinct was to look away from the thing and to totally avoid eye contact and just be quiet! I said, “B what is it what is it !?” And he’s like “woah. oh! It’s a cat!!!”

Y’all. This mountain lion (cougar as they are called here) was only about 25 yards from us! B got out his bear spray and I just kept whispering “Jesus”. But that thing was more shocked than we were apparently. After looking over at B, he crouched down just like cats do and scurried off.

All I could picture was this thing stalking us and following us…so we walked backward until we got to the connecting path with the basin area about 200 yards away.

I asked B how long that all lasted. I genuinely thought we were in major trouble. SO many thoughts rushed through my head. It felt like 30 seconds but he said try 5 seconds lol. Time had slowed down so much! Our adrenaline was pumping so hard and we were just so thankful to be safe!!!!

I’m so so thankful that thing was scared of us and didn’t want to be anywhere near us! I have to think that we were just being too quiet. We don’t have this problem with the kids. It had also rained so there was less scent of us? And it was just such an unpopulated trail that day. Thank you World Vision jacket for making me look like a bright orange, non-tasty specimen.

This is such a rare encounter !!! I think all 3 of us were in such shock and couldn’t believe it haha. It felt like a glitch in the system. They estimate that there’s only about 40 of these cats in the whole park! (2 million acres!)

We feel so honored, I think?!

When we felt safe again all I could think about was that I didn’t get a video or picture!!! Haha But God knew what He was doing and really I’m just grateful we were okay.

We learned a lot and reviewed what to do with different animals. B learned to make sure the bear spray is facing away from your face and actually toward the animal . 😂

2 days later we were in that area again and I was anxious to try to find scat or prints so we could report the sighting to a ranger. Assuming the cat was long gone, we walked back there and on the way we saw this cutie!

Look at how the humans don’t even notice him: 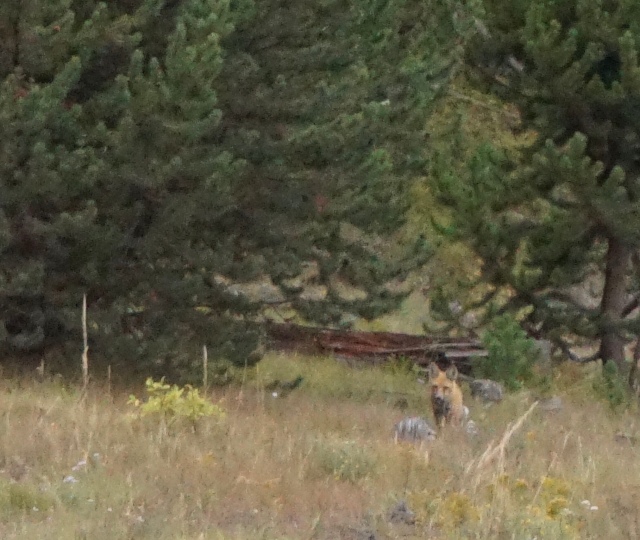 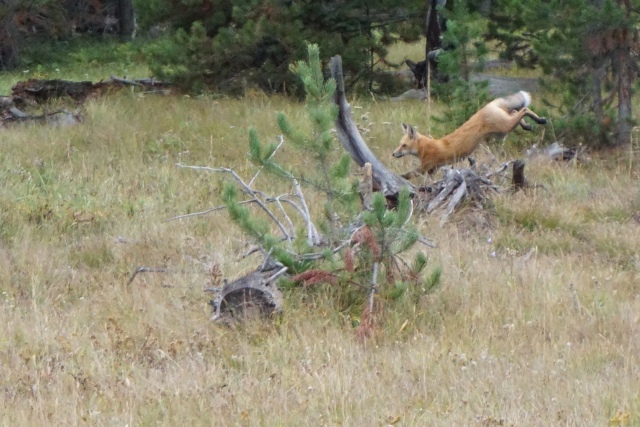 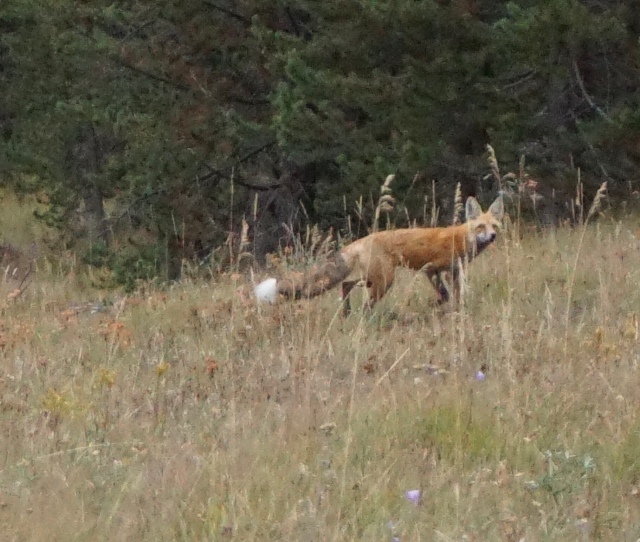 The ground was very hard and mossy and rocky off the trail so we didn’t see any prints. But we do have a memory to last a lifetime!!!

At first when we got in the car after seeing the cougar, I felt sad and said, “ohhh B that will never happen again! It was a once in a lifetime moment and I missed the picture!”

And he said, “well….never say never. But if that never happens again – then great!”

We did catch a sunset together one night as well. We are so truly thankful for all this special time together. But nothing will compare with that once in a lifetime date night haha! 💕 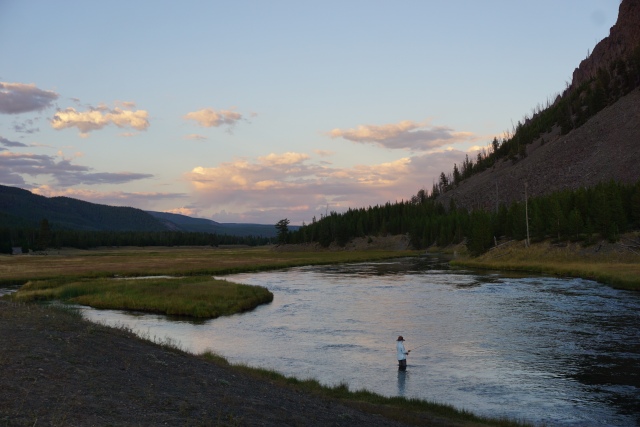 P.S. It’s the year anniversary of our house being flooded by Florence and gosh there’s just so much I want to say. But it’s also too much to try to communicate in a PS. But I also can’t be silent!

We are just so grateful for God’s love and personal care and provision. He truly uses all things for the good!!! From the first second we evacuated until the house sold to an investor months later, He more than flooded us with His love. Every day He was the provision we needed and we saw miracle after miracle. Thank you all that are reading this that were part of being His heart hands and feet to us: MM & Pa for keeping the kids in NJ so they could just have fun with family and not have to see the devastation. The kids still talk about “Aunt Roxie school” all the time and all the memories with you 3, Uncle Bonesy and their cousins.

Gma & Peepa and how you tirelessly worked at our house and rallying people for us (and feeding us!) so we could focus on getting resources and help for our neighbors.

Before we even got back to NC, a dear lake shawnee friend and many NC friends reached out in tangible ways and were the gifts from the Lord that we needed. They were the acts of love right away and it gave us peace and joy knowing we wouldn’t be alone throughout this process!

I have an entire spreadsheet full of neighbors, friends, family, strangers turned friends, organizations, community leaders, journalists that cared for us so well. You know who you are. We felt Gods love through you. Thank you for loving our neighbors and us.

That month was full of so many amazing experiences.

Here are some pics of the flooding and some glimpses of Jesus’ amazing love flooding our neighborhood: 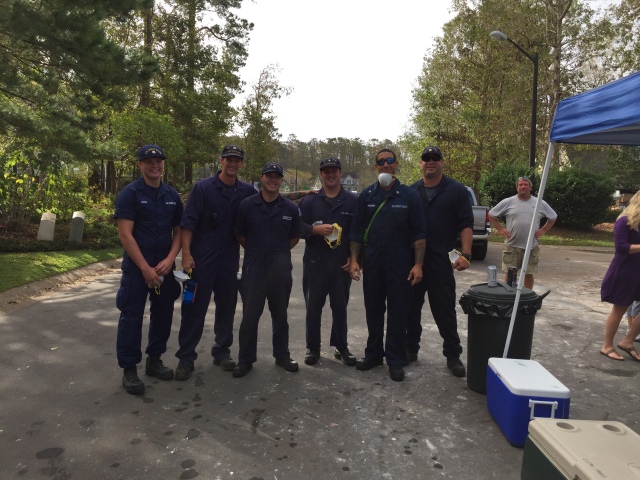 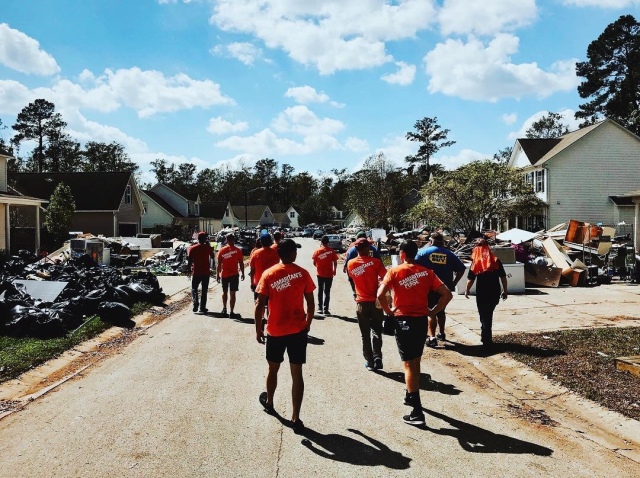 (I had to include that one because those donated golf carts were such a God send!) 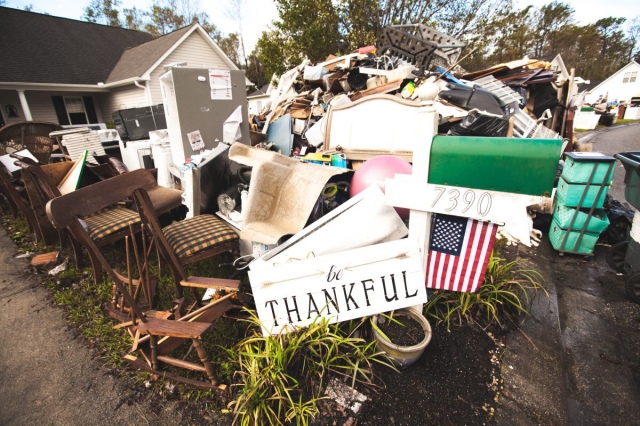 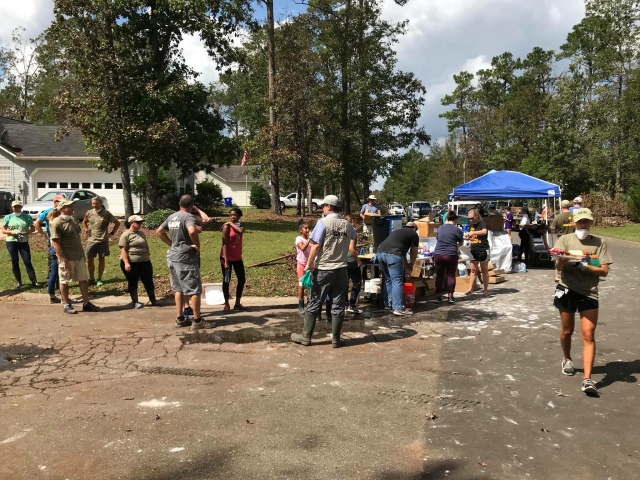 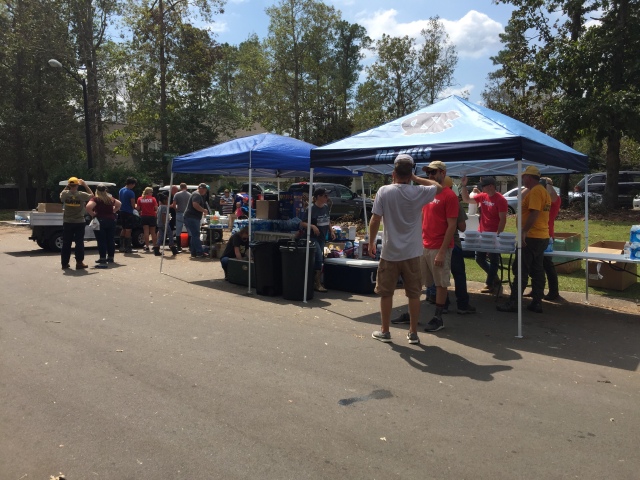 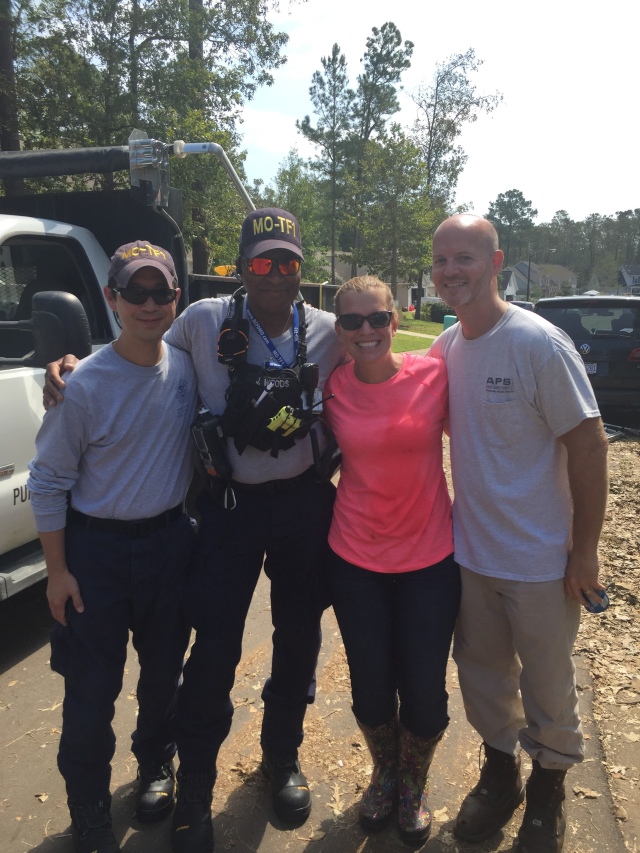 While B & I sorted through our stuff and served our neighbors…. our kids were having one of their favorite months ever. Oh we missed each other terribly. It was the hardest part and I still feel the ache of not being with them when I think of it. They remember the ache too. But I knew they were so happy and safe. And wow has the Lord redeemed that or what !!!?

We have gotten so.much.quality time this year and it’s more than made up for that loss. He is so good! Thanks again MM Pa Aunt Roxie Uncle Bonesy for loving them distracting them and protecting them. 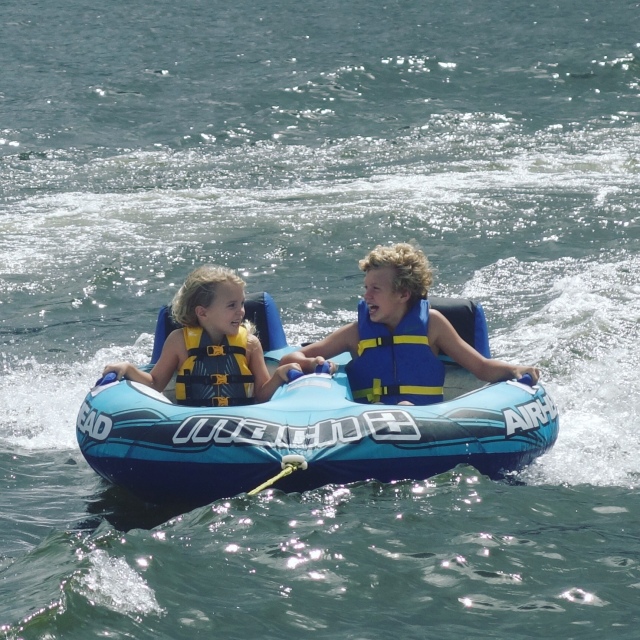 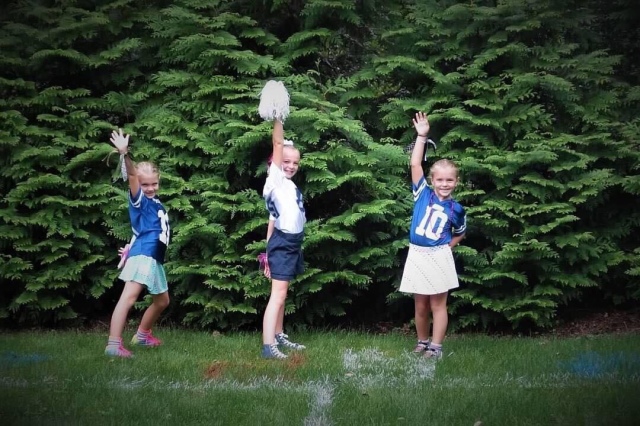 Yesterday – we had an amazing time of sharing in the morning as a family. B and I told the kiddos our flood testimony again …. with details they may not have known or remembered because of what a whirlwind it all was. After, we all felt very overwhelmed, lifted up, filled, teary eyed, and just so thankful.

Then we ended up having a terrible day lol…. we drove hours to our destination only to find out we had left somebody’s shoes behind lol. And it went downhill from there.

At the end of the day we peacefully settled in our beds counting our blessings. Our joy is so much bigger than any one moment or any one day. It’s all good. 😊

God is sovereign. Jesus is sufficient. Count your blessings.

One thought on “Yellowstone – Waterfalls and our once in a lifetime date night! (And the one year anniversary of our house flooding)”