Our 2nd field trip this week was to Historic Philly! In the words of one of the Park Rangers, it was “desolate” and a great day to sightsee. We parked right under the Independence Visitor Center and got our tickets for Independence Hall. Oh my goodness I LOVED Independence Hall! 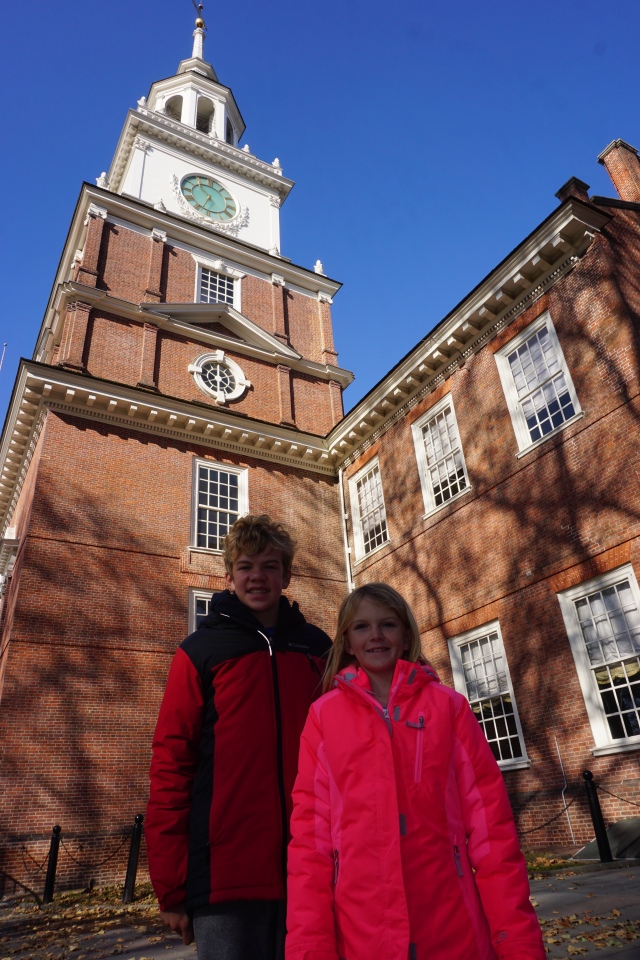 What a great experience.

The first room was the Supreme Court of Pennsylvania in the 1700s:

We enjoyed learning about the court room and the Ranger’s descriptions of how court was conducted then vs. now. She also showed us what used to be hanging above the judge’s seat – which was King George III’s coat of arms until July 8, 1776 when a group of Pennsylvania militiamen stormed in and tore it down. (Now whats hanging is the commonwealth’s emblem.) 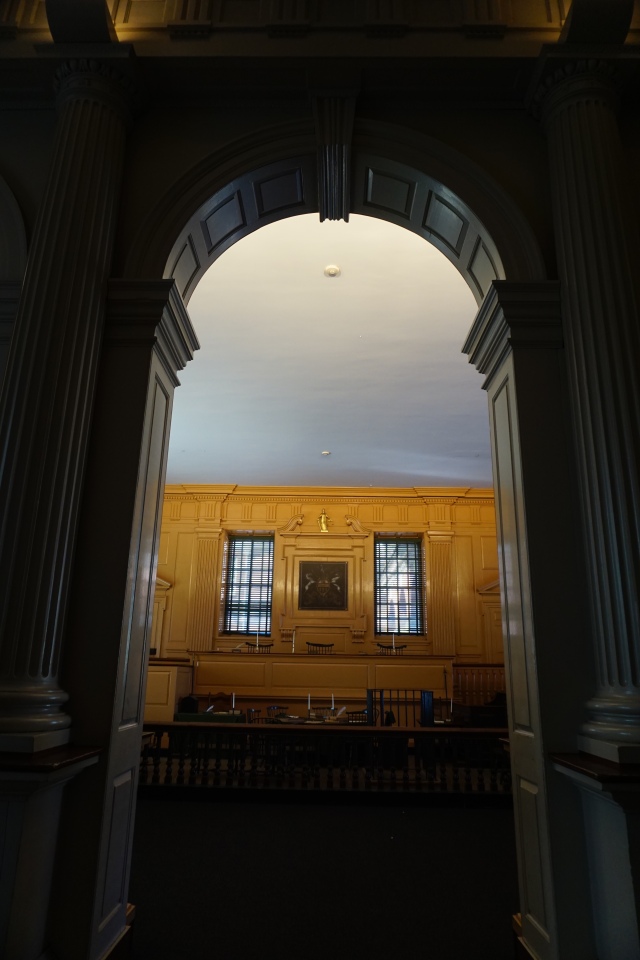 And then the room where it all started. Oh my goodness! I was actually teary- eyed thinking about how the Lord used events and discussions in this very room to impact the entire world:

The assembly room! This is where both the Declaration of Independence and Constitution were signed. It is just incredible to think how “ahead of their time” these men were and how their action, intelligence, and convictions affect us still today. We sure aren’t a perfect nation – but wow – I am so thankful for the ideals that were penned in this room. Even though some took longer to manifest into our society than others, I believe the principles of justice and equality we see continually progress in our history were written into the DNA of the country right here! On the flip side, it really makes you see how far we’ve wandered in other areas of being self governing independent free states. (I loved the book If You Can Keep It by Eric Metaxas about this.)

Here’s a quiz question for you… when was the Declaration of Independence Signed?

August 2, 1776 of course! Most of us think the 4th of July but that was when the declaration was voted on and approved! It was officially signed by the delegates on August 2nd.

On July 4th when the declaration was approved, printer John Dunlap printed 200 copies with the date a July 4th written on it. There are 26 remaining copies of that original declaration and here’s one of them:

E loved seeing the ink set used in the signing:

It was a great experience! I really think every 17 year old should be required to visit Historic Philadelphia for a field trip before entering society as an adult. 🙂 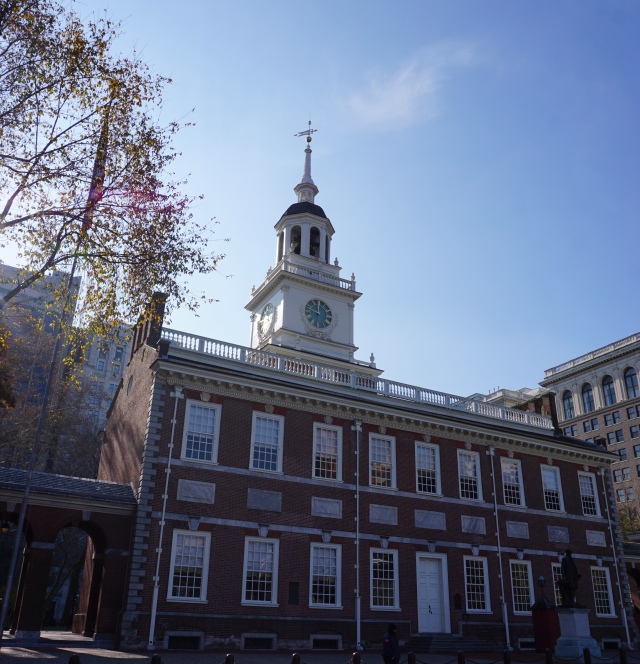 Next up was the Liberty Bell. We loved this icon of freedom and the Bible Verse on it! 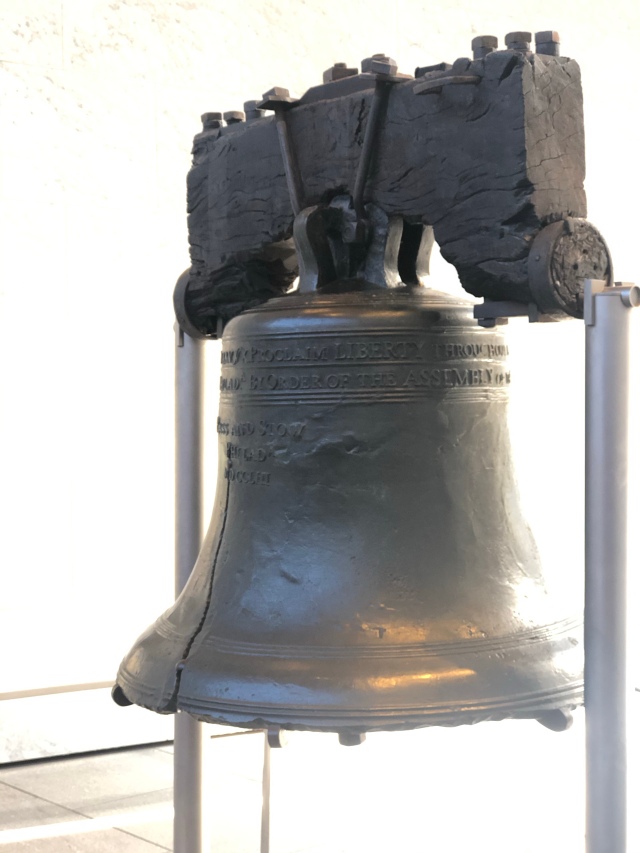 It was first heard in 1753 on the State house in Philly. What a prophetic scripture written into it foretelling what would soon be declared in this special city right under this bell!

Proclaim Liberty Throughout All the Land Unto All the Inhabitants thereof – Lev 25:10

It wasn’t until the Civil War that the inscription was noticed and used as inspiration to further freedom and equality for all. Something new I learned was that the Liberty Bell traveled around the country in the 1800s and maybe even was part of the healing process after the war. I liked the videos and pictures of fathers handing their babies and children up to the train to kiss or hug the bell!

(I love Independence Hall in the background)

There’s a lot to see in historic Philly so we had to narrow down our options since we were just there for the day. We chose the Benjamin Franklin Museum, Printing Press, Betsy Ross House, Elfreth’s Alley, and Christ Church.

We enjoyed Benjamin Franklins museum and were really impressed with all he mastered and invented. I can’t even begin to list it all. He pretty much just pursued knowledge and progress in every area possible haha.

E’s fave was this instrument he invented similar to making music on glass rims haha:

RR fave was probably his studies in electricity and how he created the terms “battery”, “positive charge”, “negative charge” and others.

I had multiple favorites about him:

The Printing Press was great! We loved the demo and lesson on what it involved. The kids liked the origin of “Mind your p’s and q’s” and “upper Case” and “lower case”. It was a fun process to watch and remarkable at how quickly they used to have to work to get a paper in order and printed. Of course there was no spell check and a wrong word would mess up everything! 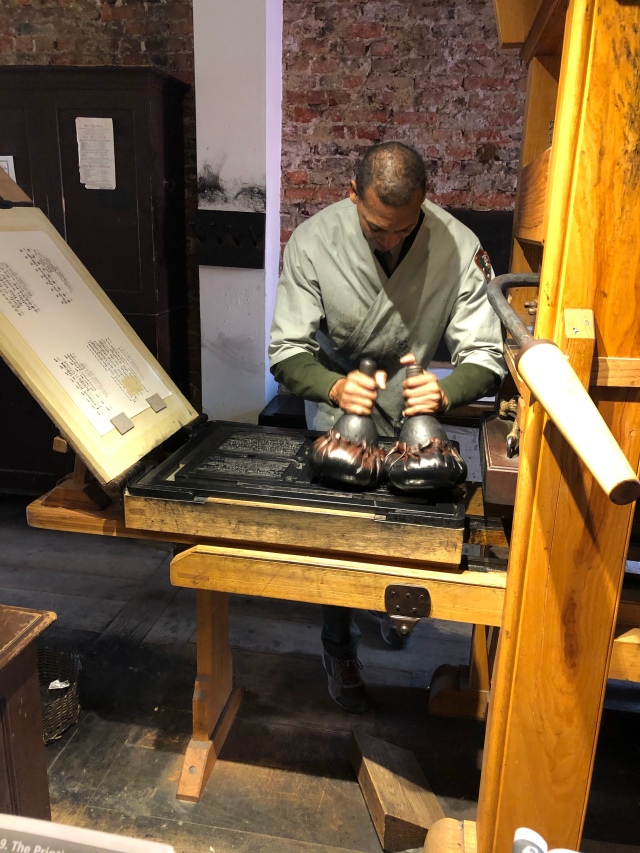 Next up – Betsy Ross’s house! Betsy’s stand-in did a great job sharing bits of Betsy’s story and the process of unifying the country with one flag. It was fun to think that George Washington, Robert Morris, and George Ross visited her in this very home May 1776 asking her to sew a unifying flag. E liked when Betsy showed her how she cut and sewed the 5-point stars. They had originally asked her for 6 point stars but once she showed them how much quicker it was to make 5 point stars, they conceded. 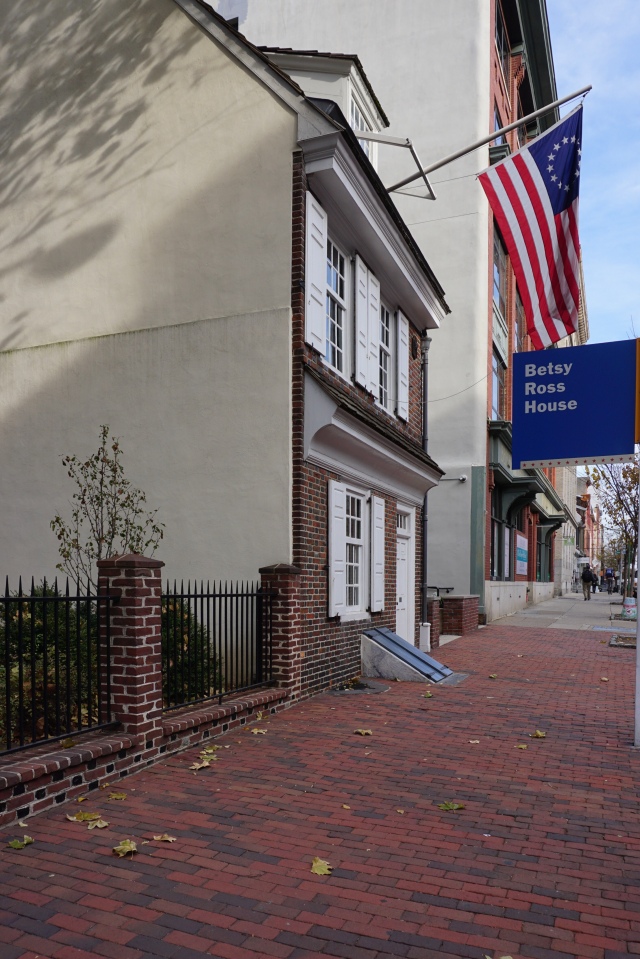 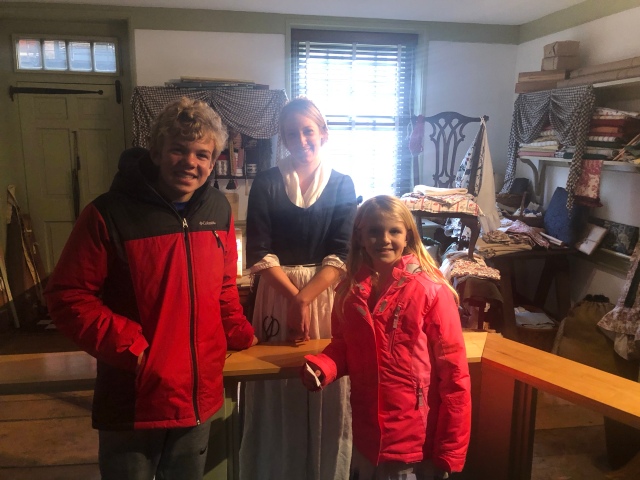 Here she is showing E how to easily fold and cut out a 5 point star: 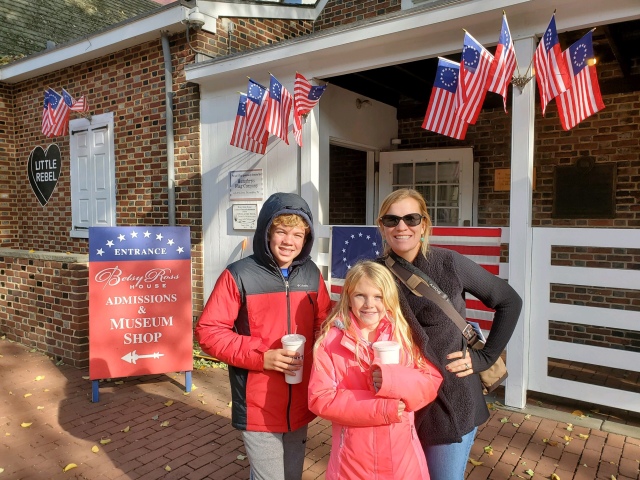 And Elfreths Alley the oldest continually inhabited street in the nation! 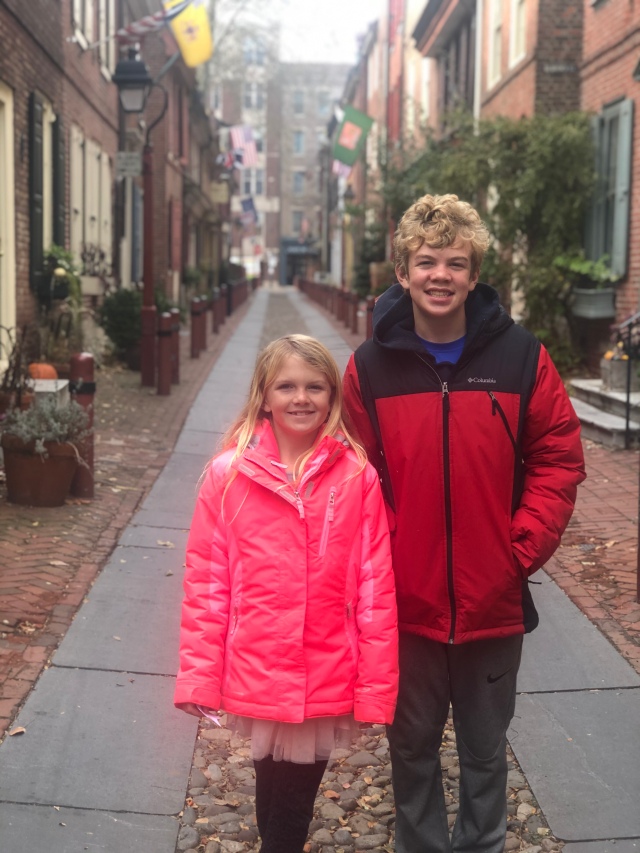 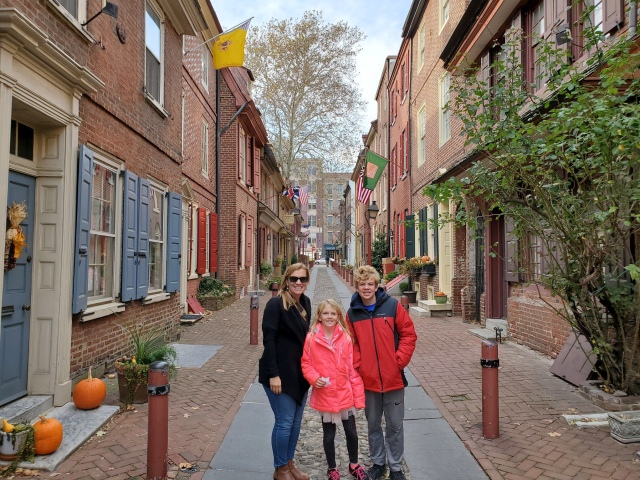 It was so pretty and clearly lived in: 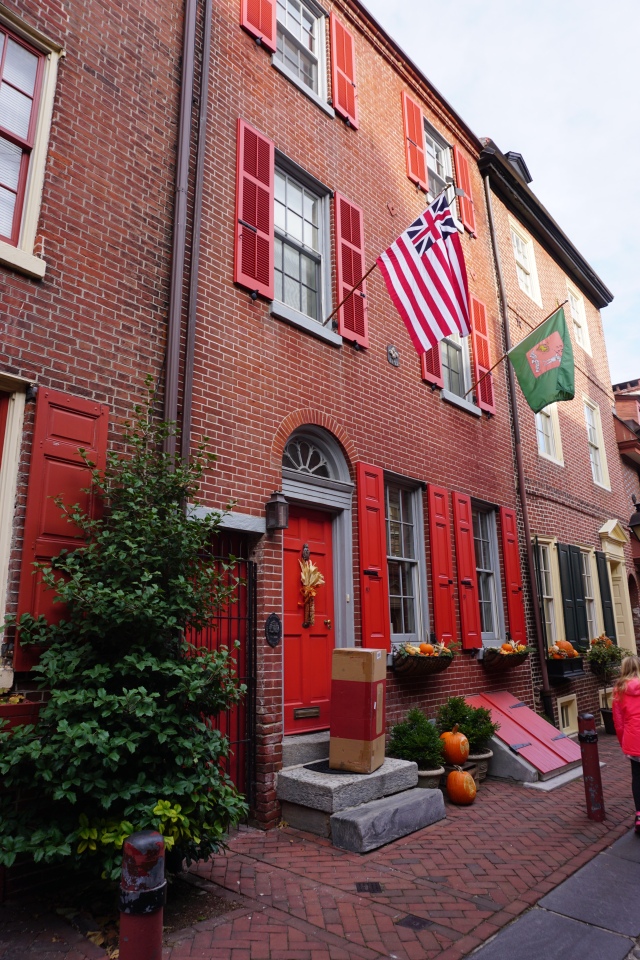 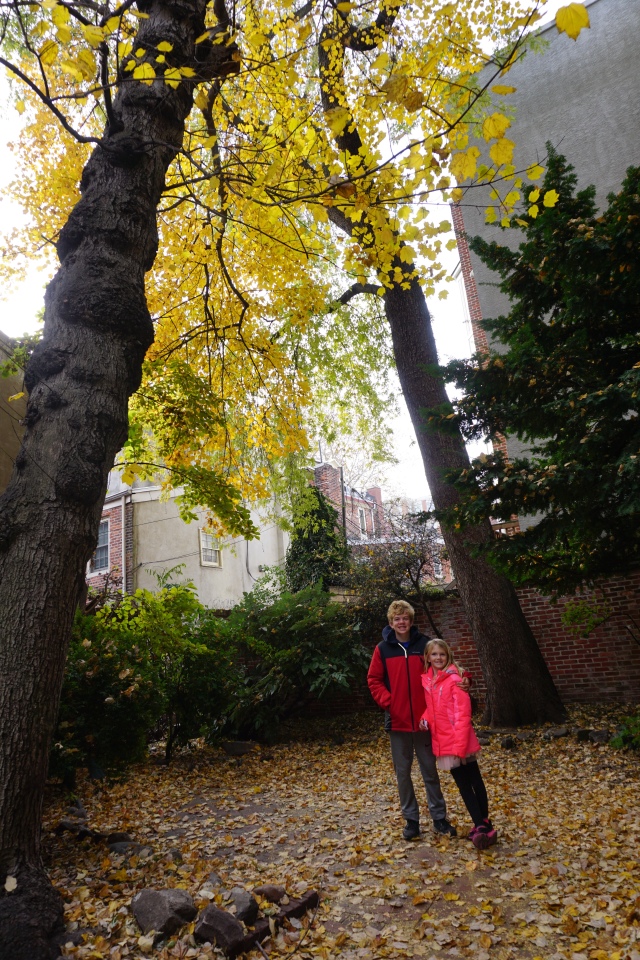 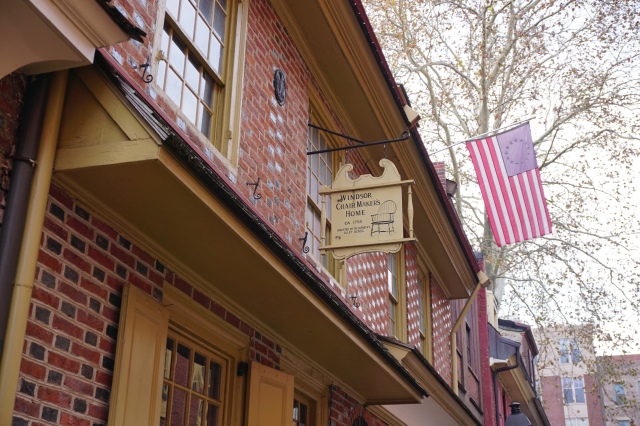 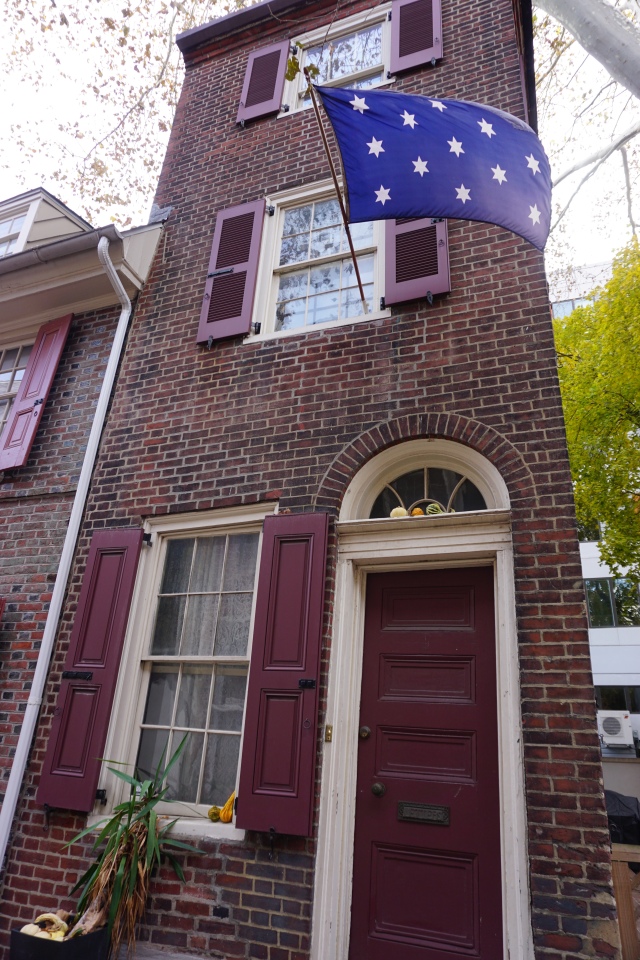 We didn’t get any pictures of Christ Church because you had to pay to enter but it was so cool to see where so many of our founding fathers regularly attended and worshipped. Can you imagine all the prayers and worry let out there!?

And of course we did try a Philly Cheesesteak: 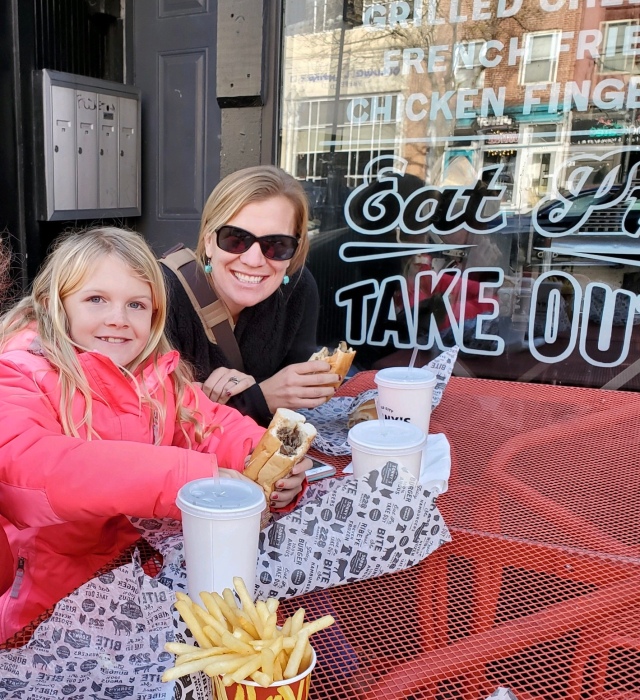 Thanks Pa !!!! We really enjoyed the day! 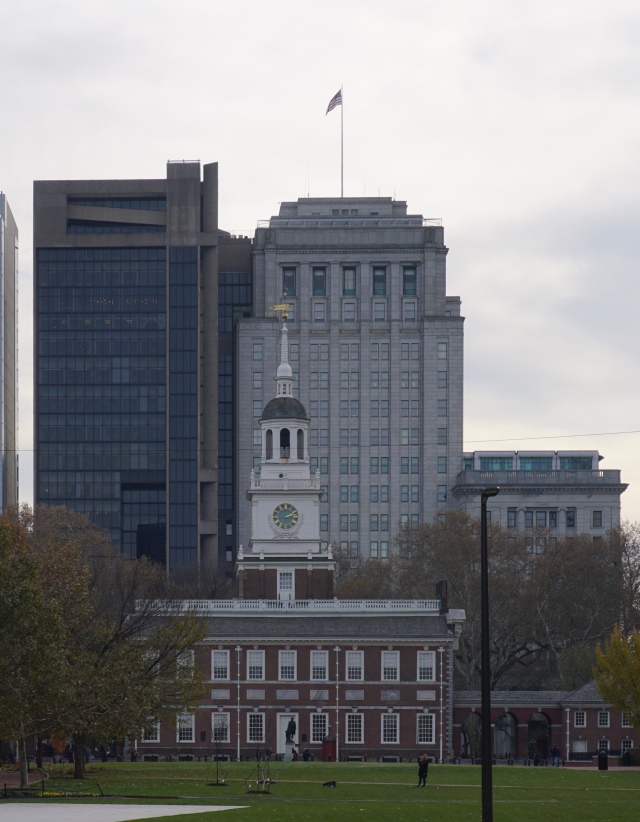 And AB got the gift of staying home with MM and having a homeschool day with her which she loved: