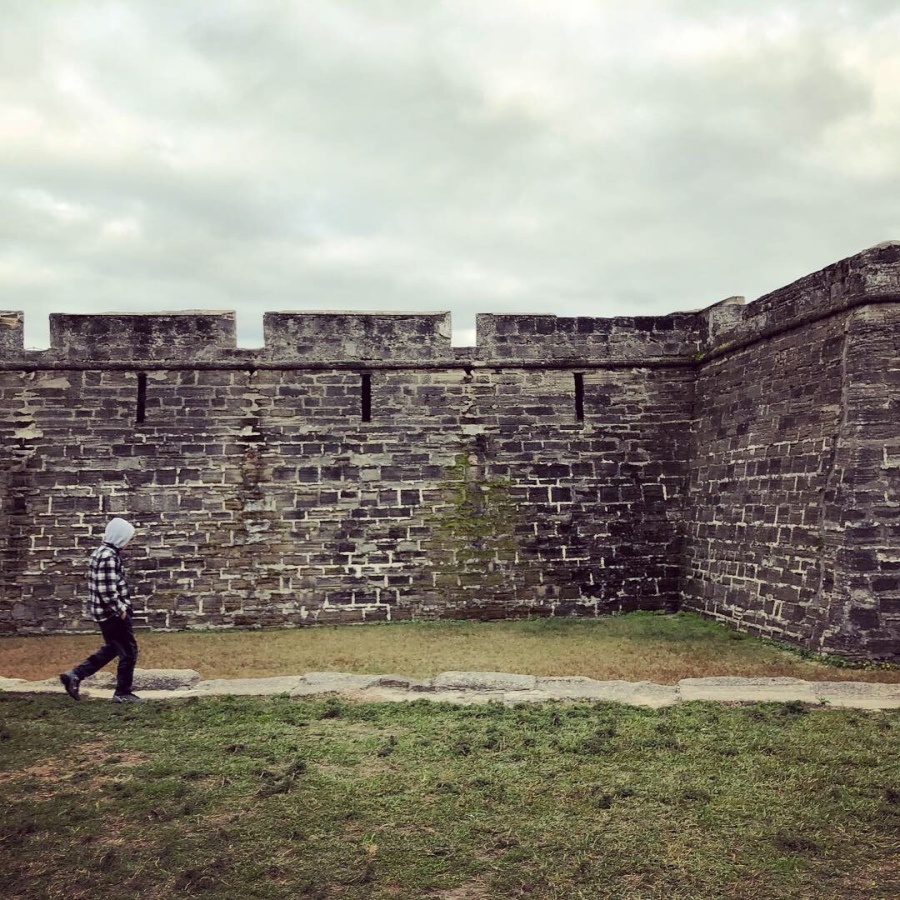 For you history lovers out there here’s a run down of what we learned about St Augustine on our day trip there!

1513: Ponce De Leon from Spain – at a staggering 4 foot 11 inches (the tallest man on his ship) – lands on “La Florida”, as he calls it. Supposedly he was looking for the “fountain of youth” but that hasn’t been confirmed. Here’s a nice little statue of him. But don’t use that word around him. Rumor has it that he was the tallest on the ship because he didn’t allow anybody taller than him to board! 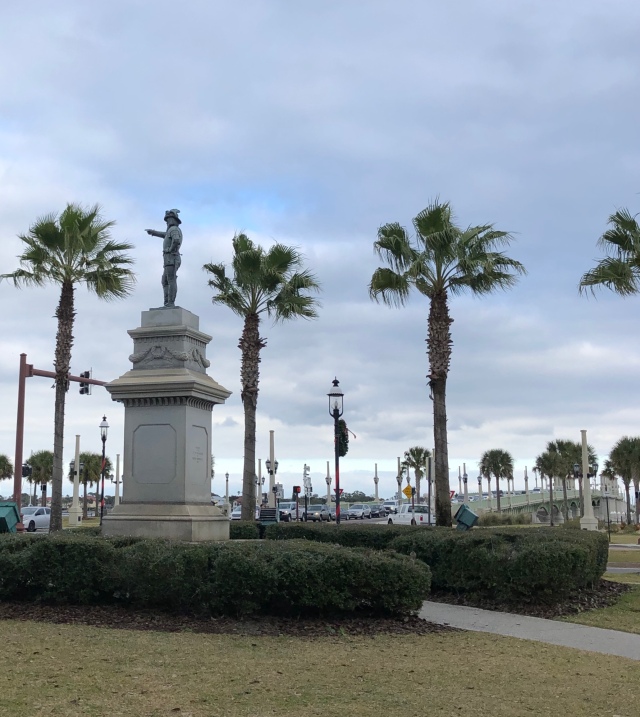 Fast forward to 1565 when Spanish admiral Pedro Menéndez de Avilés is exploring La Florida and sees this land on August 28. In honor of the patron saint of that day, he names the colony St Augustine.

Where he landed there now stands a 280 foot cross. It is the tallest free standing cross in the western world. Isn’t it a crying shame that this truck had to ruin our view? 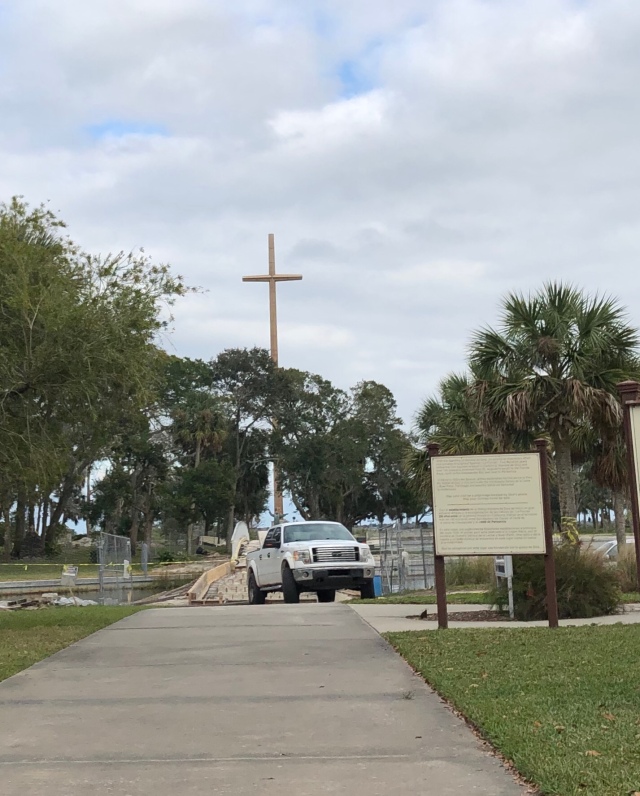 The Timucua native Americans had a settlement nearby named Seloy.

Did you know that “Spanish moss” is named such because the Timucua thought it looked like the beards on the Spaniards !? 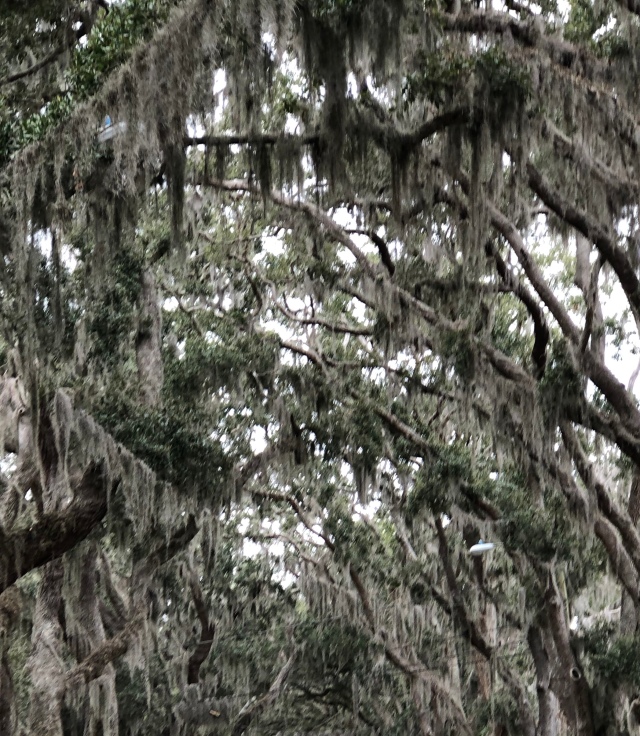 The Carrillo de San Marcos (Mark’s castle) is probably the most popular image of St Augustine. Look at our first view of it: 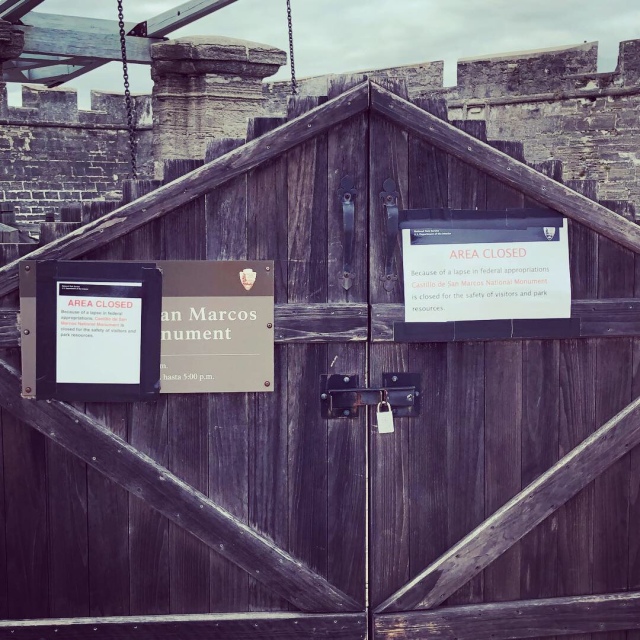 But no fret my pet – these little signs have the power to keep all rule-following tourists away so we were basically the only ones around! We were still able to explore all around “the fort” as locals call it , even see dents in the walls from cannonballs, read about it on my phone, and RR did wonderful re enactments though his Spanish accent sounds more like a British pirate and he needs to learn more Spanish names than “Juan”. 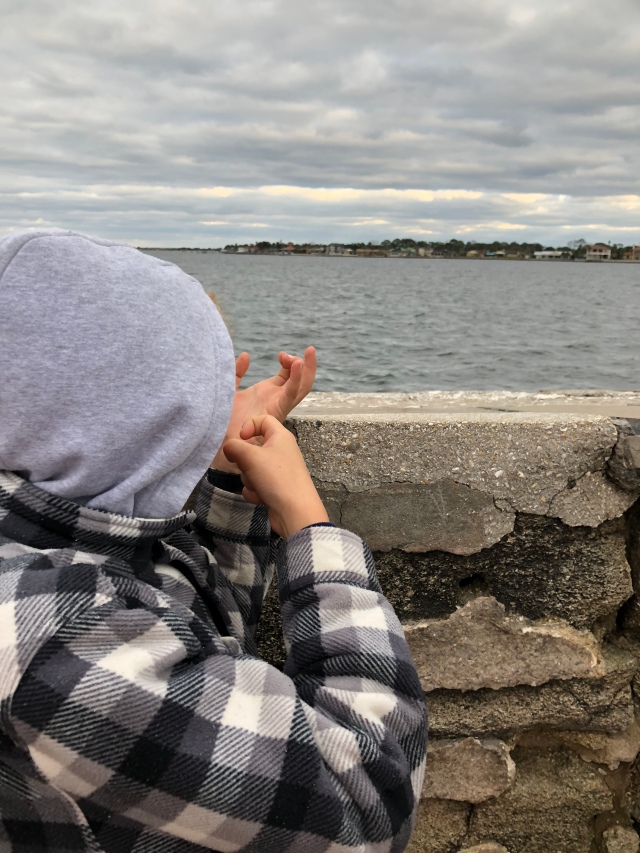 Don’t worry MomMom only one child decided to climb the sea wall while my back was turned and she got down promptly when I squealed like a sand hill crane. 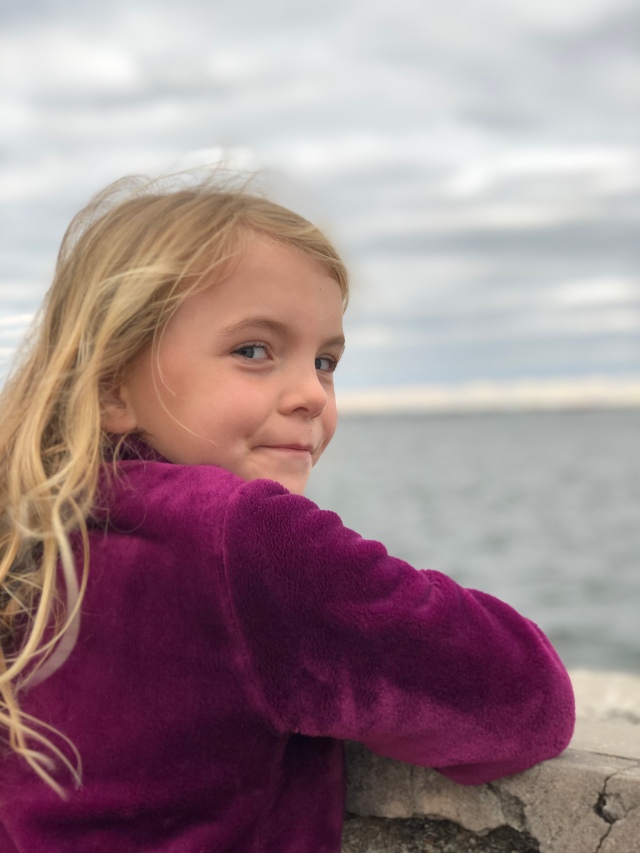 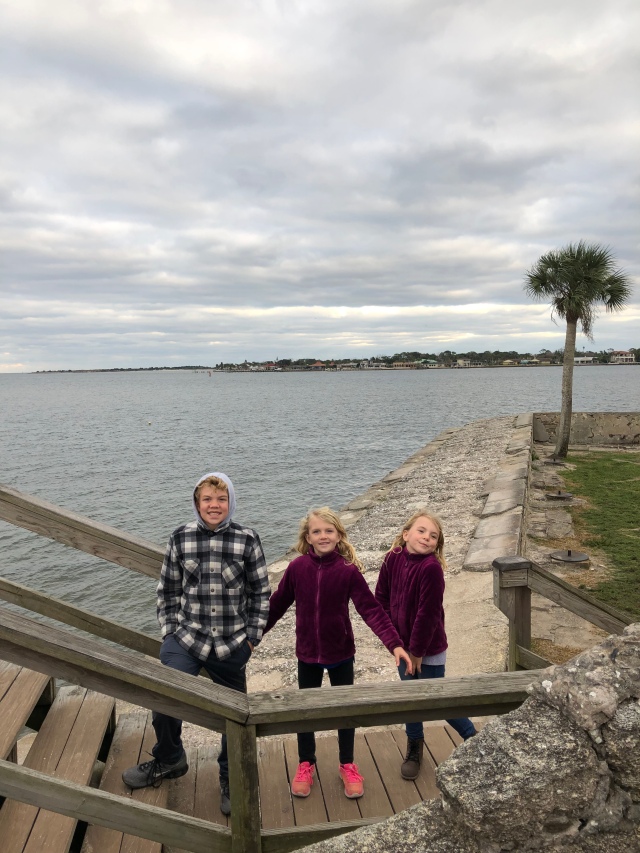 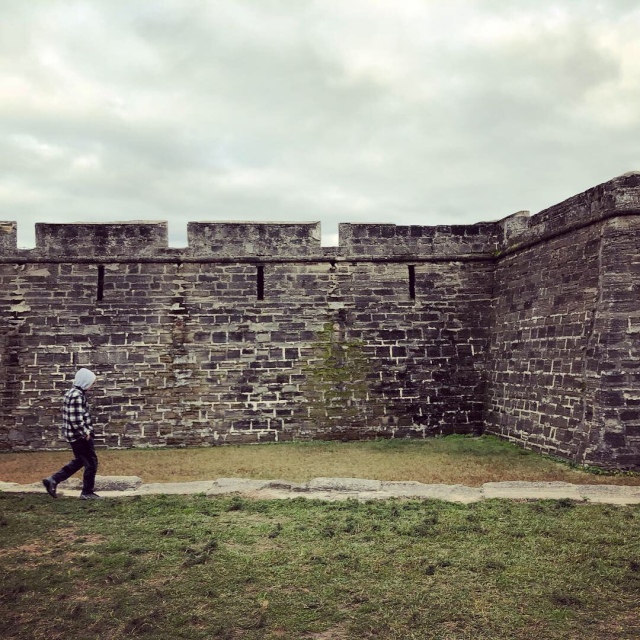 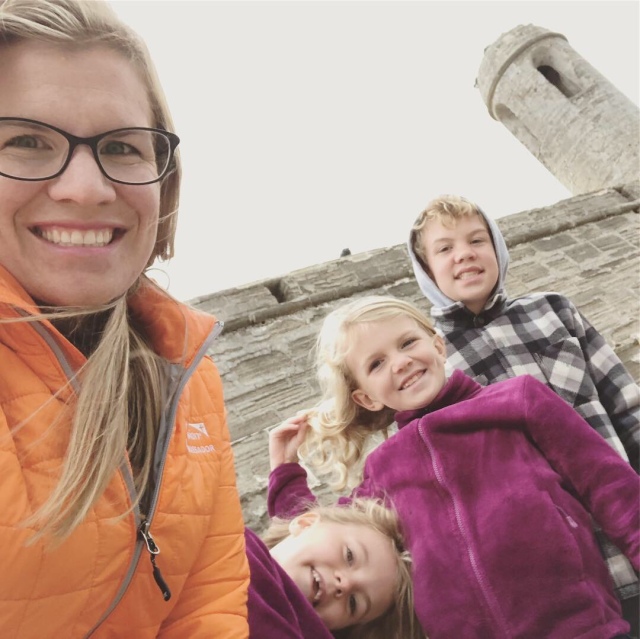 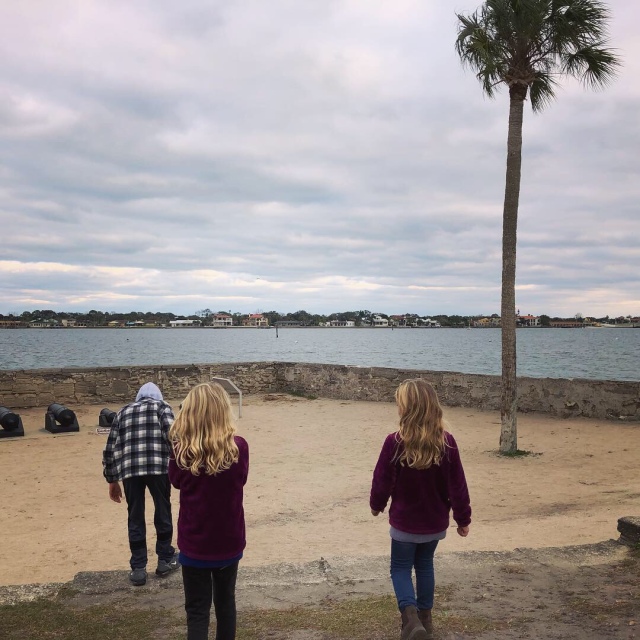 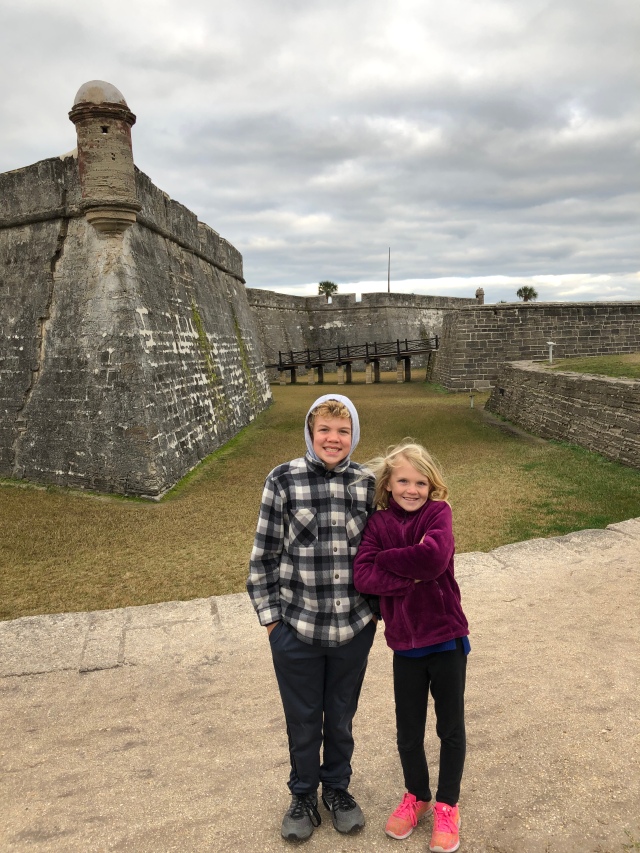 The fort and many other colonial era buildings were made from coquina… that is NOT Spanish for cocaine.

Coquina is Spanish for “shellfish” and it’s basically like cement made of shells. But before it hardens it is like play-doh texture.

To quicken things up let’s just do some bullet facts that the kids remember about the colonial history of the area : 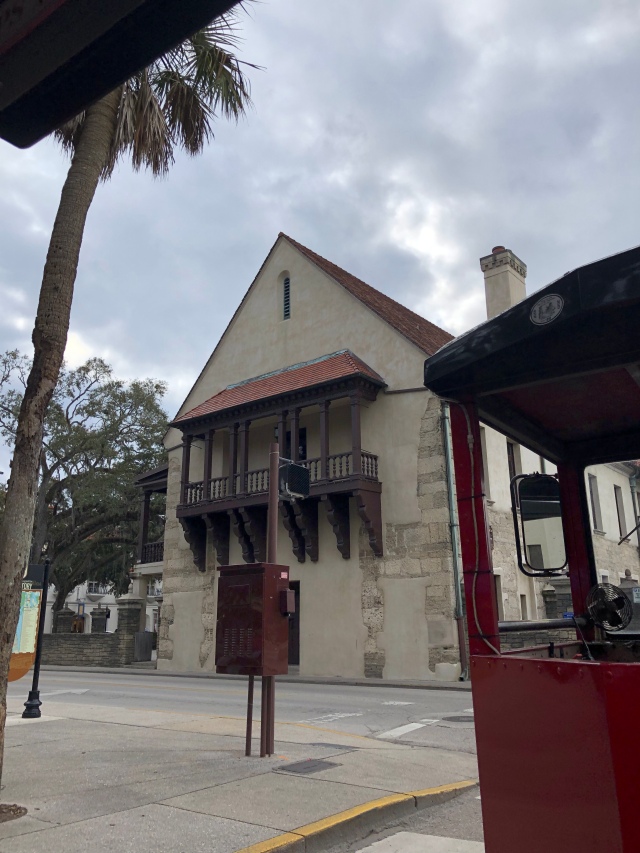 Moving on to the 1800s because I can and this is a free class you’re taking here.

The era of Flagler. Standard Oil (now Exxon Mobil?) tycoon. 1800s. Things got a bit foggy during this part of the tour because some Long Islanders boarded behind us and I got busy interpreting into southernese for the kids what they were talking about.

I do have to say it’s a good thing that MomMom and I drove past Wilmington that fateful day in the year 2000 instead of St Augustine because just like UNCW – Flagler is a beautiful college! All the buildings match and are just beautiful . It also meets the 2nd requirement I had for a college which was that its close to a warm beach. 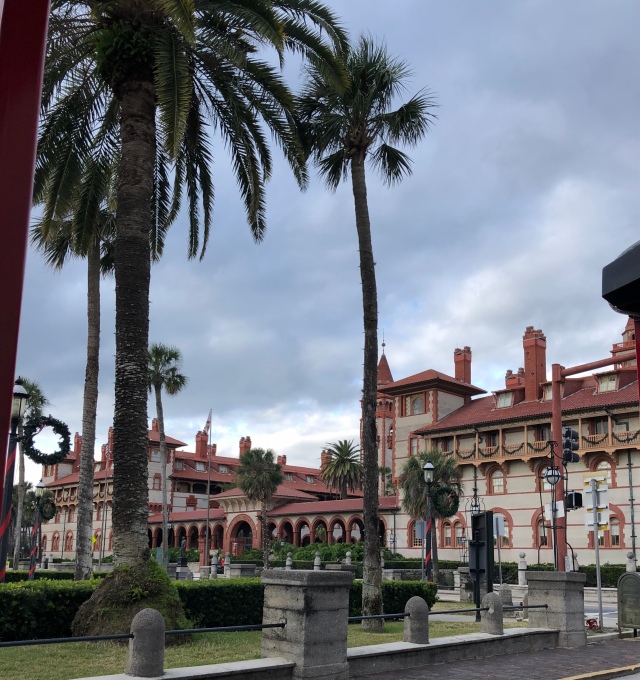 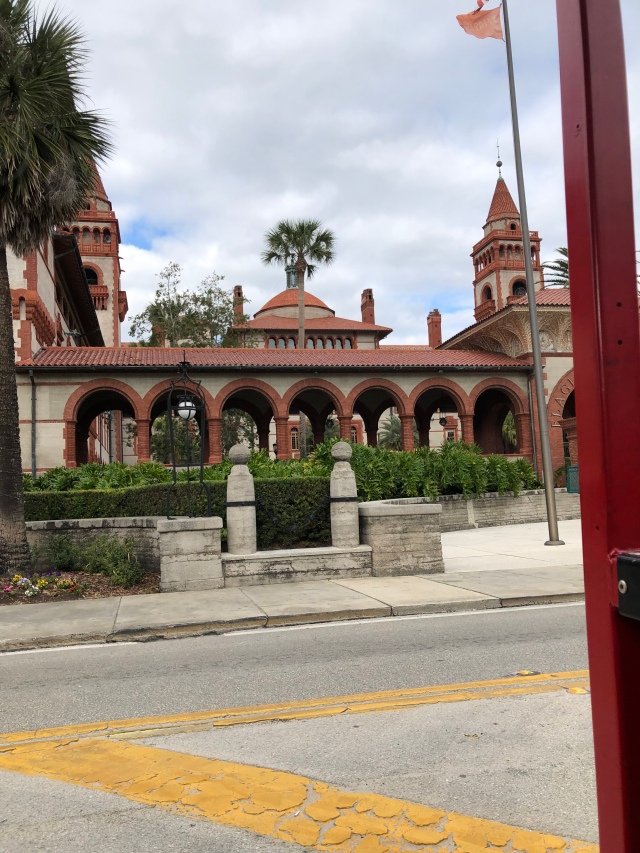 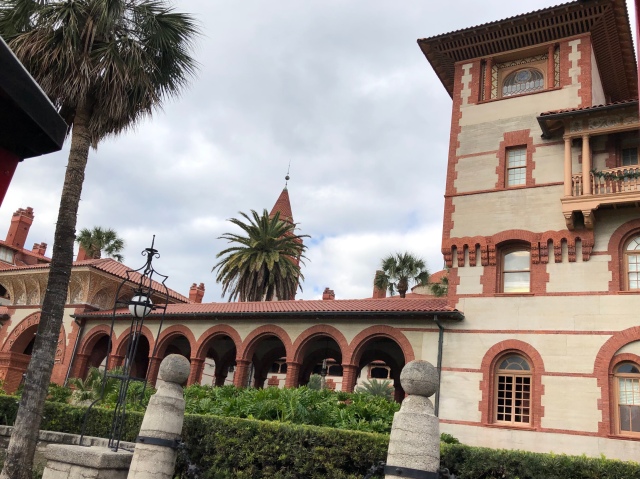 That is true Tiffany glass you see there in the circular-ish part below . It’s been ugly-ed by protective covering. But it was designed and made by Flagler’s BFFs Tiffany. 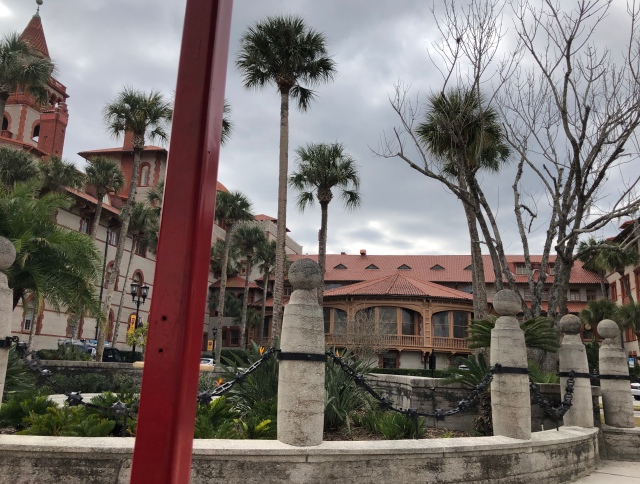 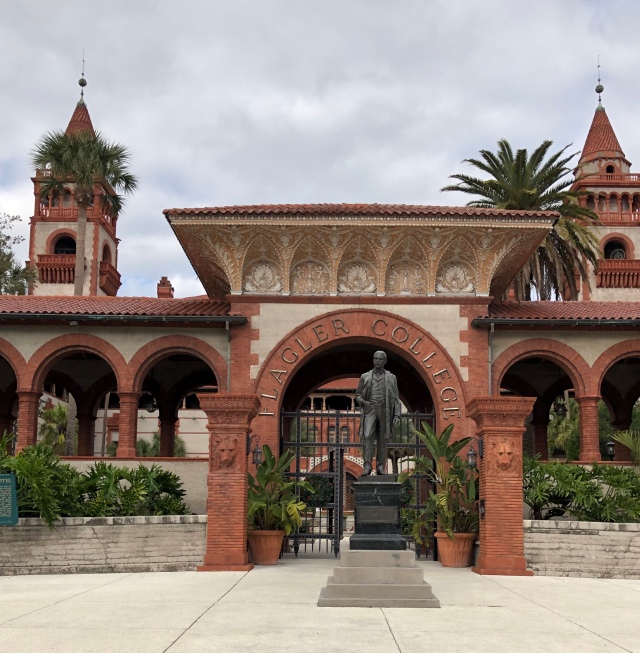 Fun fact: The guests were all scared of the new invention of electricity so Flagler paid “switchers” 47 cents a day to sit in the hallway and switch the lights on or off at guests’ requests. That’s about $100 in today’s currency.

Flagler was totally loaded. He built the Methodist their beautiful church building. Sadly this is the only photo I captured. 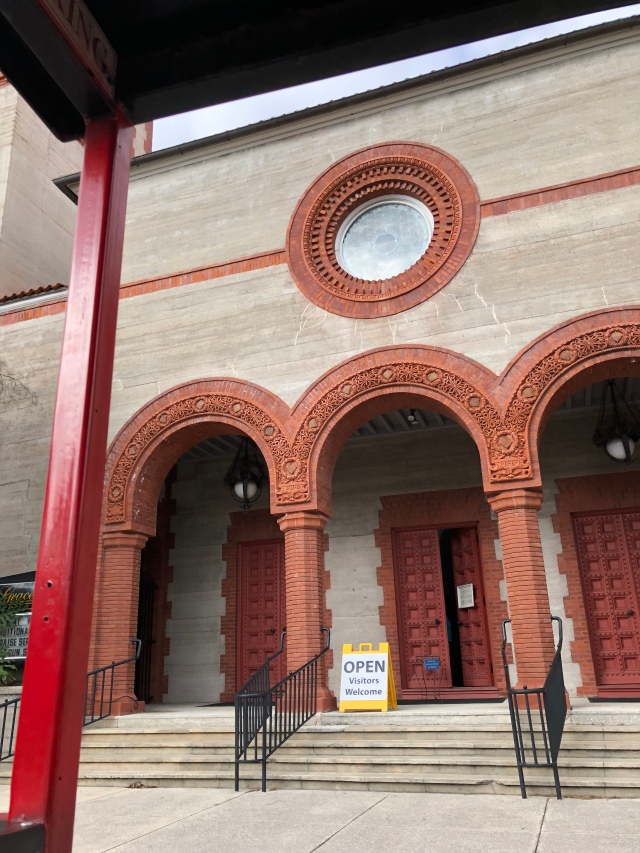 And you better believe when the Baptists saw how beautiful that building was they marched to Flagler and flattered the mess out of him until he would do anything for them to stop talking to him…. I mean until he decided to generously donate to them as well ….with the stipulation that they never have a bell in their church, ever. Here’s the Baptist bell-less church building built with his money 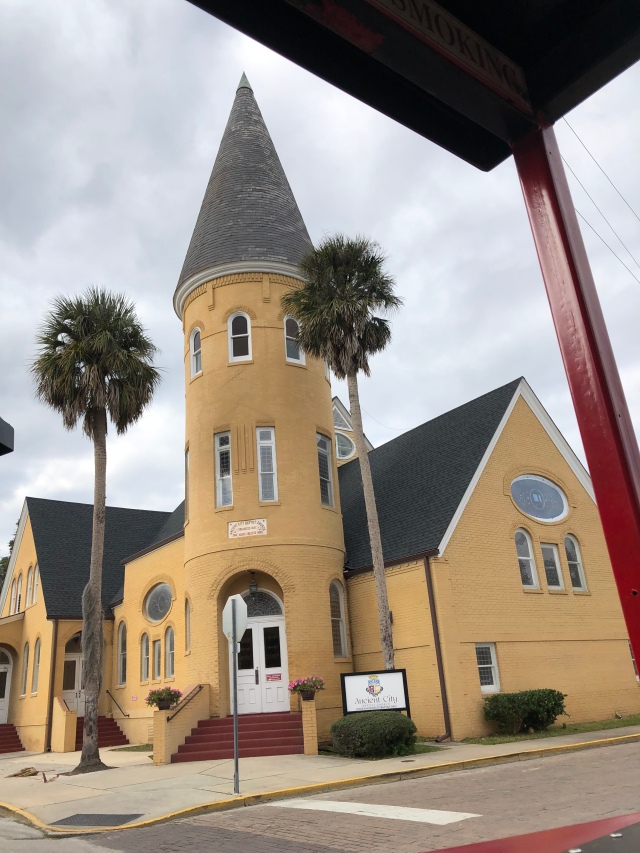 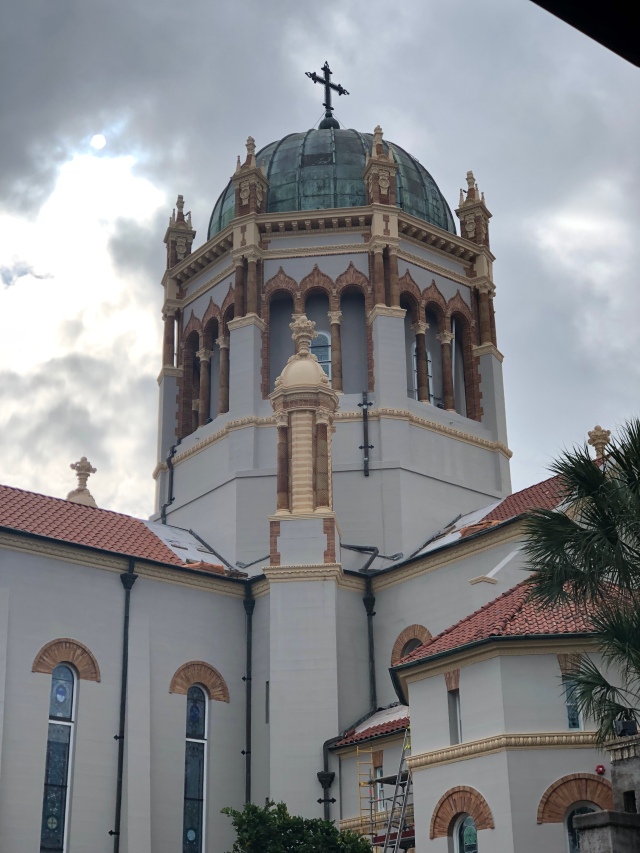 Well I did like him until I heard this story: 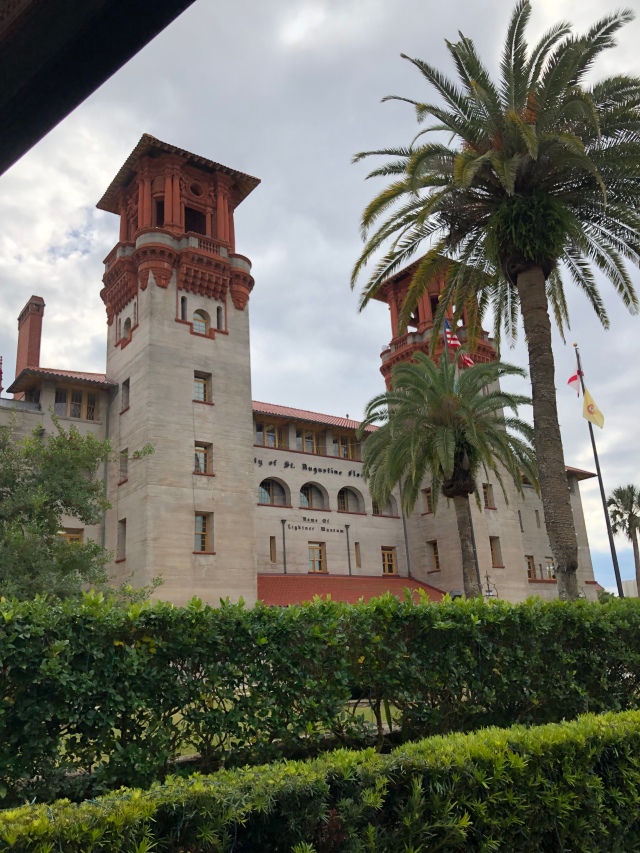 This one WITH amenities because his guests needed things to do since they weren’t out enjoying nature like they should have . I guess perhaps when you’re demanded to wear 35 pounds of clothing and also whale baleen around your waist until you can’t breathe, it’s difficult to be active .

This rounded out area in the pic below is the shallow end of the pool.  On the other side of the building is another rounded end that held the deep end.  Flagler put a curtain in the center of the pool and the men were given the shallow end where they could socialize – smoking cigars and closing business deals. He decided the women should be banned to the deep end where they would be working so hard to keep their heads above water they wouldn’t have energy to gossip. Hmph! Flagler shmagler. 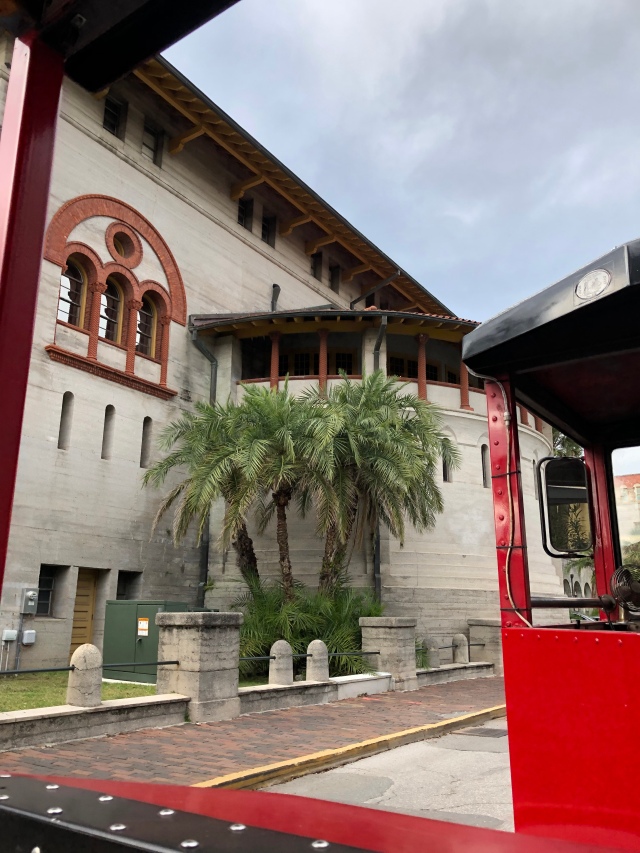 I have 2 last things to share from St Augustine.

First – this beautiful oak tree near The Fort and Fountain of Youth!  The U of Fl has officially recorded it to be over 700 years old! Wow ! Isn’t it incredible to think of the changes The “Old Senator” has seen and who possibly has sat under it!? 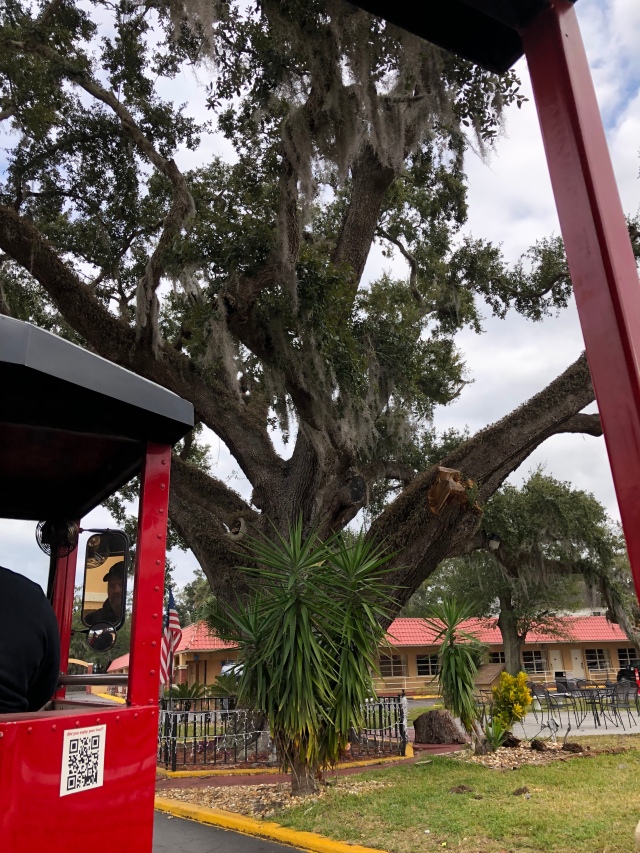 And 2nd. Since I’m posting this on MLK Jr. day.

This office space was, I believe, a dentist’s office that had the first non-segregated waiting room in the city.  This area of the city is named “Lincolnville”, which was founded in 1866 by former slaves. 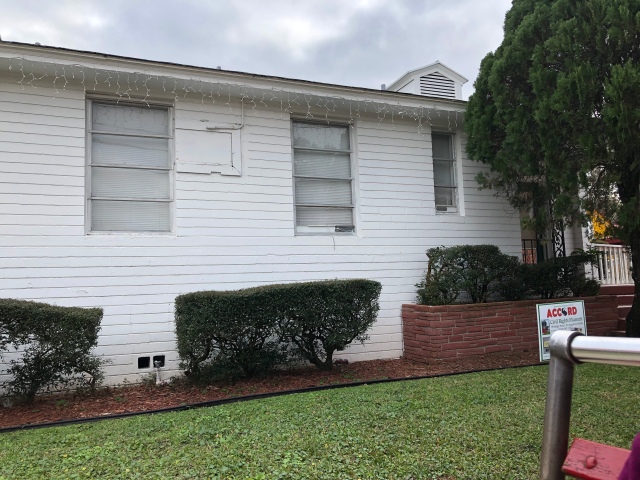 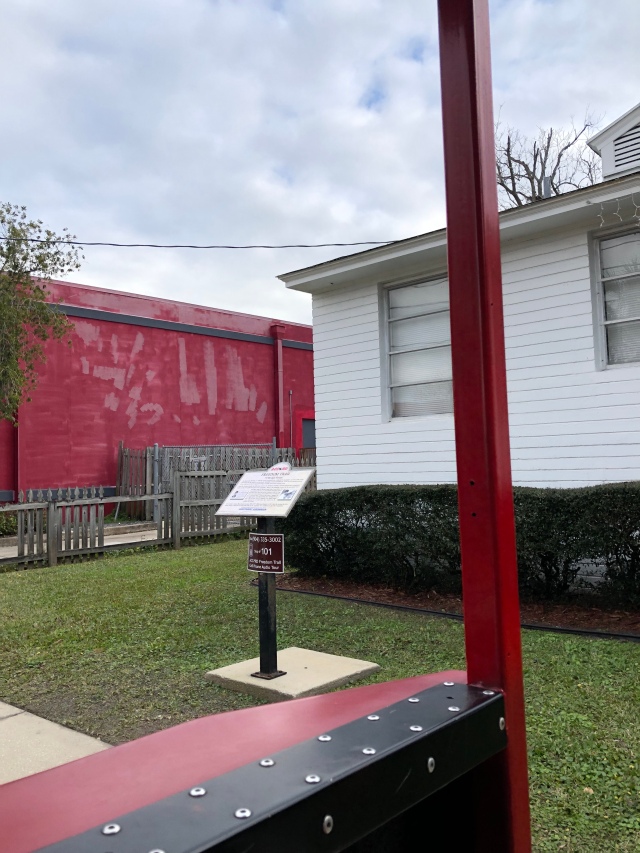 It became the headquarters for the civil rights movement in the area.  The plaque in the yard there tells this story:

One day, When MLK Jr. was in the city and in this building, the owner of a local tourist attraction came in with a gun and said to MLK Jr, “I came here to kill you but I can see that you’re a God-sent man so I can’t”.

It’s a city packed with history and it was a great day for us ! 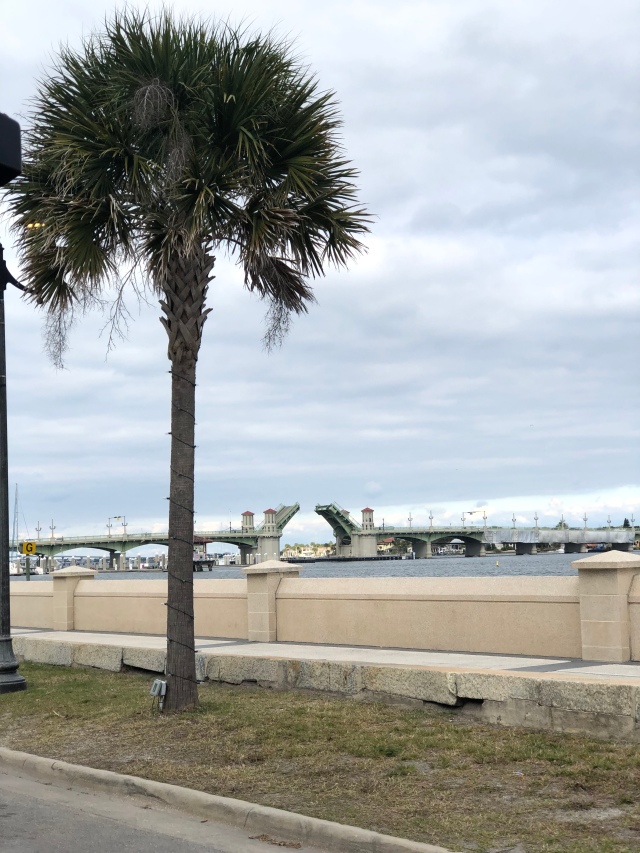 We hope to follow up on the lessons today and learn more about the Timucua since we really didn’t hear much about them.

One thought on “St Augustine”