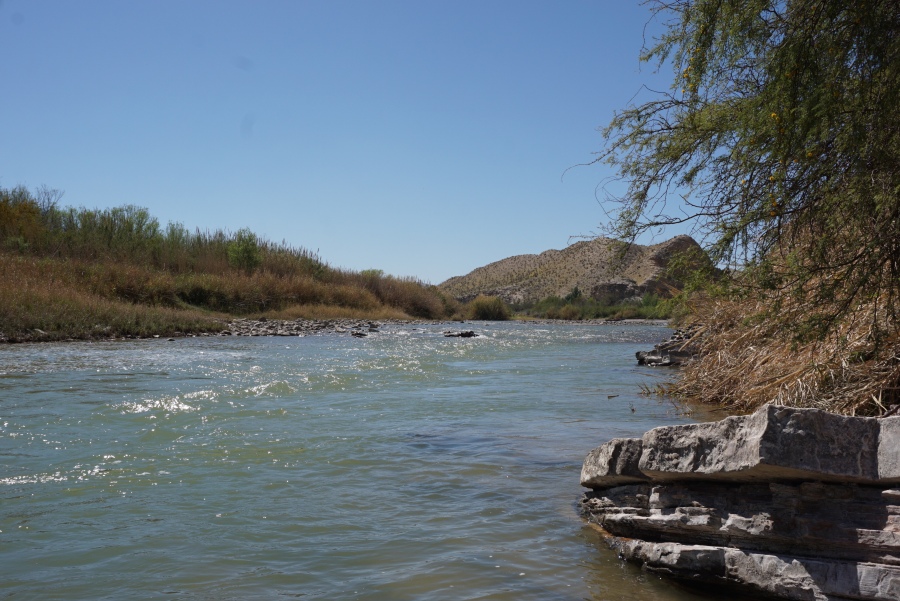 and we also saw our 2nd road runner and he cracked us up! They are hilarious to me. God has a sense of humor, for sure. 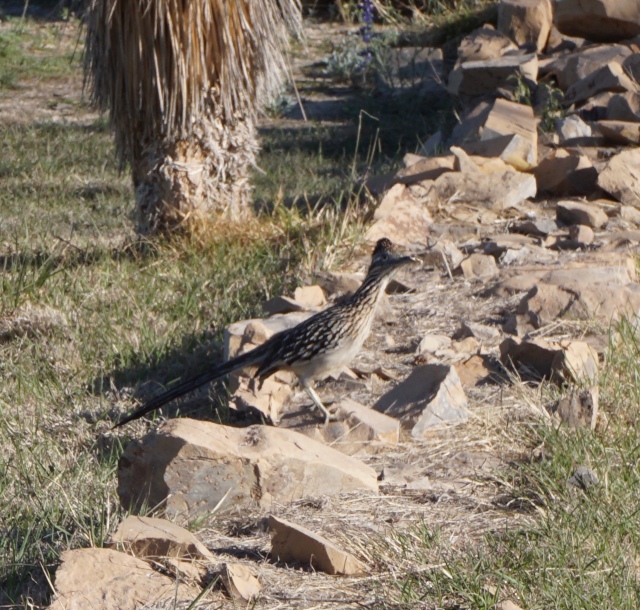 The kids got their Junior Ranger badges:

(This park ranger was hilarious. He gave a very convincing speech against the over use of smart phones, which I applauded, and he did a great job discussing with the kiddos all that they learned at the park. The pledge he did with the Lil Rookies included a promise they would not tell anybody about Big Bend or any other favorite place they find this year so that the places can stay secret and secluded. Mommy didn’t make that promise and I’ll be promoting and sharing as I always do!)

Then we headed to our 4th visitor center – this one was on the SE corner of the park near the Rio Grande. 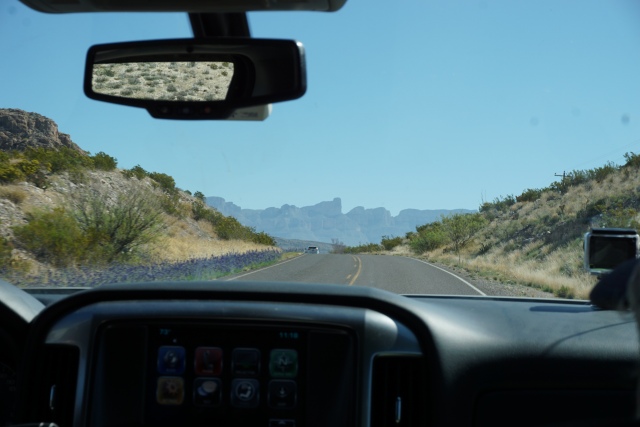 On the way, we had to stop and delight in the blue bonnets!

RR cracks me up. He’s all cool guy right here but all I see is a cute little golden poodle 🙂

Even though they are the state flower of Texas and can be seen over much of the state, the blue bonnets down at Big Bend are apparently twice as tall as the common ones! 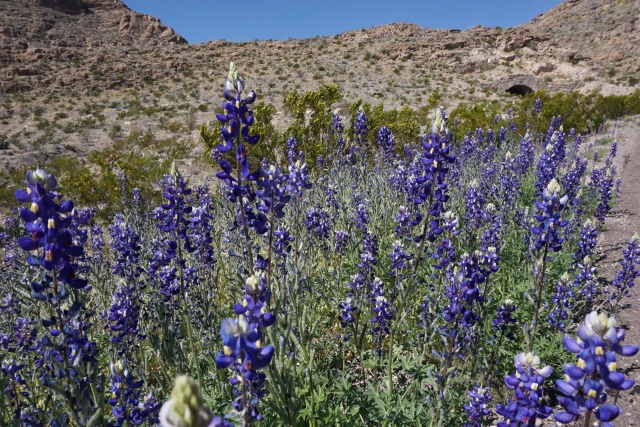 (Of course all the wild flowers reminded us of Lady Bird Johnson and what we learned about her and the Highway Beautification Act!) 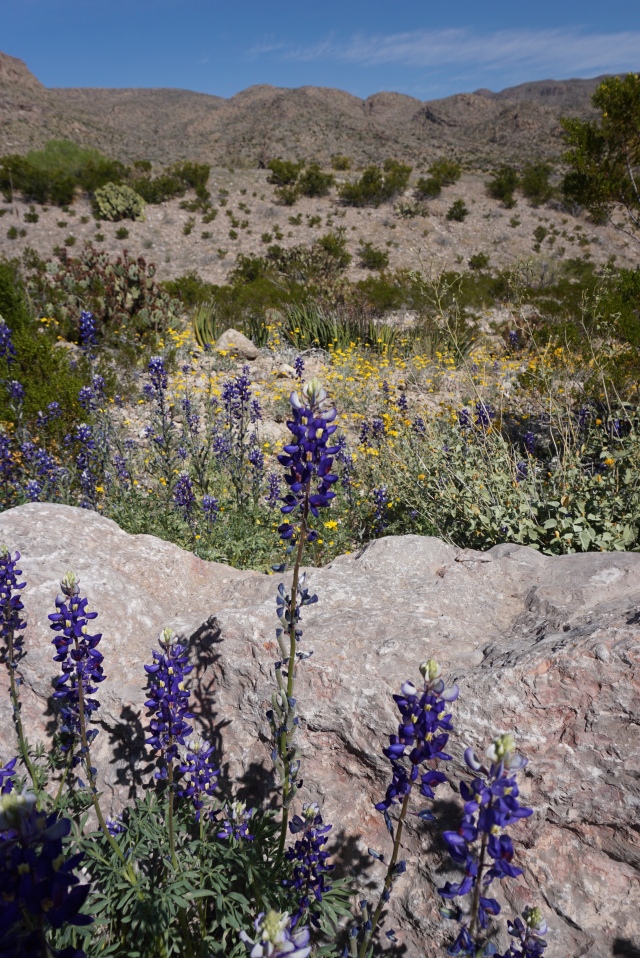 The off-roading to Hot Springs was a tight squeeze. Look how close we had to get to the side so not to slide off the cliff: 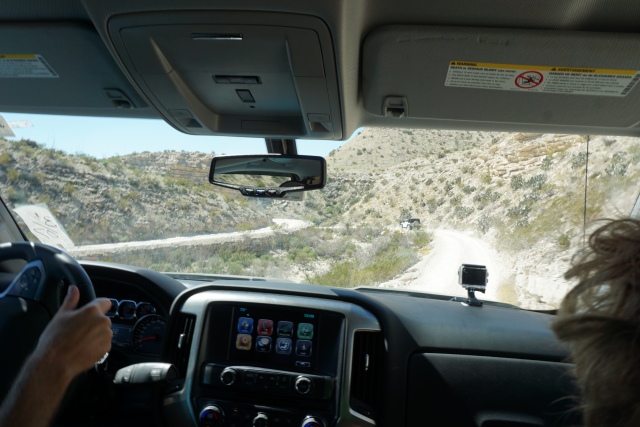 The Mineral Hot Springs were amazing!!! The man sitting on the edge there near the kiddos didn’t get the memo that you have to get INTO the tub to enjoy the soothing water…. but he was wearing a cowboy hat so we forgave him for having his feet in our pic.

In 1909, J O Langford who suffered from malaria heard of the hot springs and their healing properties and bought the area, sight unseen. When he arrived with his wife and child, they found another family already living there (who hadn’t claimed the property) but they were all able to work out an agreement. After 21 days of drinking and bathing in the hot springs, Mr Langford was cured and the Hot Springs became the first tourist attraction of the area. The springs have had regular visitors since well before the national park was established. The remnants of cabins that people stayed in are still present and the way the “tub” was designed around the hot spring is still in tact.

All I could think was….how many weeks did it take visitors to get here!? We have fast cars and the majority of roads to get here are improved…. and still it feels so far out to me. Far enough that even I was just tempted to build a house and stay. 🙂

The hot springs stay at a temperature of 105 degrees Fahrenheit. The water contains sodium, potassium, calcium, magnesium, sulfate, chloride and all kinds of other -ates and -ums.

And now for my favorite afternoon of our whole adventure so far….. it was 80 something degrees and the hot springs were certainly sooo soothing on my legs but the Rio Grande looked even more enticing! RR was the first to jump in it and B & AB quickly followed. They just let the current take them down to the rocks and they looked so happy! 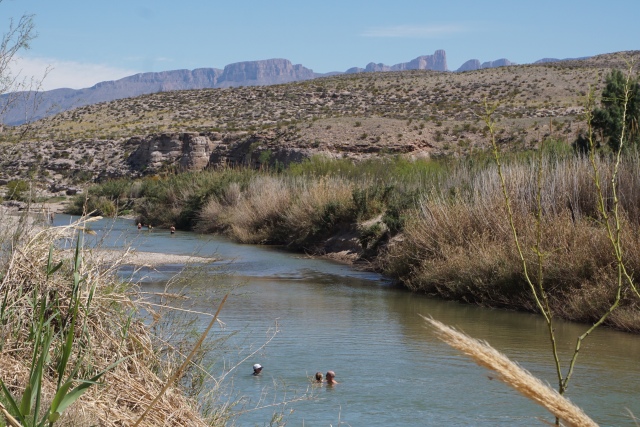 E and I decided to book it back to Betty to get on her bathing suit (she had no interest in hot-anything else so hadn’t put on her suit). 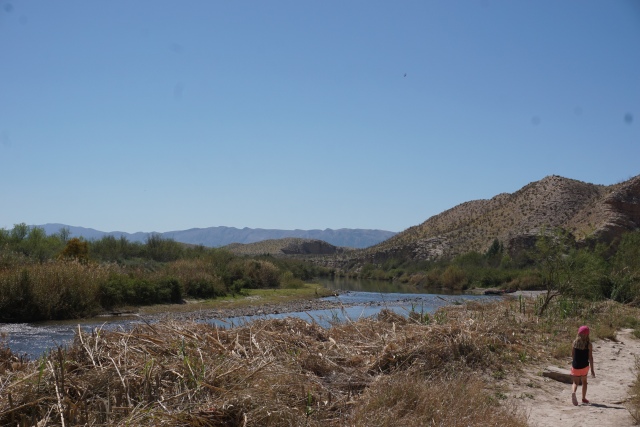 I left my camera in the truck, tucked my hair into my hat, and shocked everybody when I jumped in with my clothes on! It was glorious. I will truly never forget that afternoon. The water was the perfect temperature and such a great color.

Is there a better feeling than jumping in cool natural water after working up a sweat?!

It reminded me so much of my childhood growing up near lakes / rivers and not feeling any fear or anxiety but just living it up!

Being a part of nature like this was just amazing. Thank you Lord for creating natural hot tubs and pools for us with such an amazing view!!! 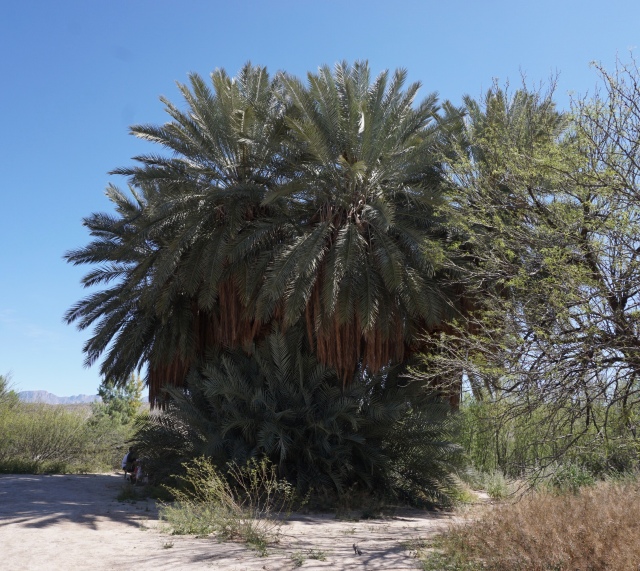 A couple of us may have even swam across and touched Mexico... but some secrets we just gotta keep in the family!

Next we headed down Mr Toads Wild Ride (remember that Disney ride?) to Ernst Tinaja.

Look at the “road” on the way there:

At one point we were bouncing around so much I felt like I was floating around in space and couldn’t get ahold of my camera and hat which were jumping all over. I got the crazy Randi laugh so hard I was crying.

The tinaja was beautiful and all the rocks surrounding it were more proof that all of this area was of course fully covered with water (a massive flood) for many years. We will continue to study more and write more about this when we get to the Grand Canyon but there was much proof all around the park of volcanic activity followed by a catastrophic amount of water flooding in and staying for some time.

For now, enjoy the beauty of how it all ended up: 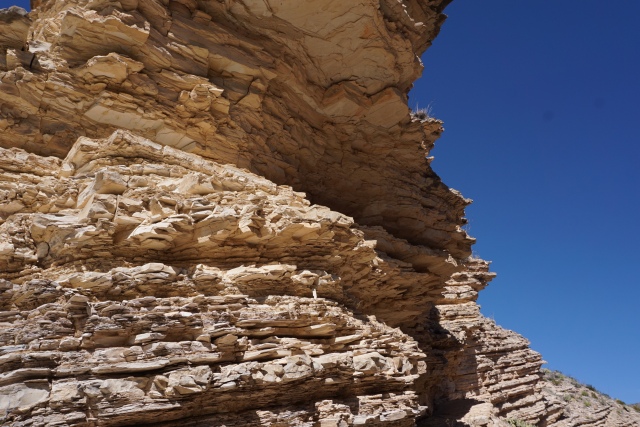 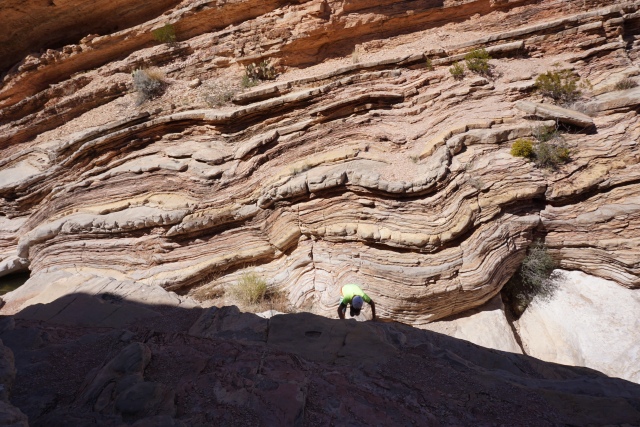 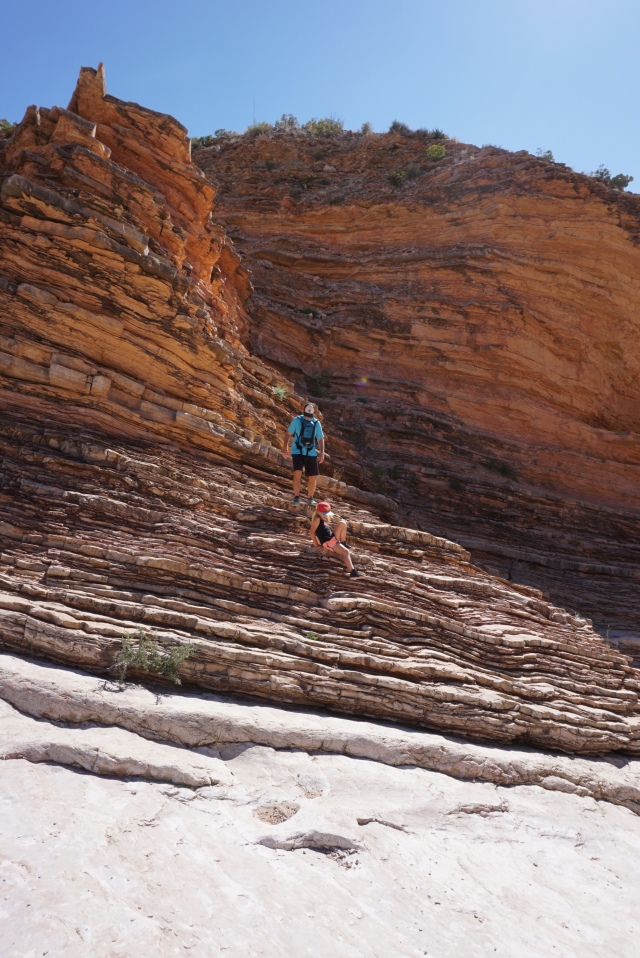 We ended the night and our last bit of gorgeous weather at dinner with some neighbors we met in Marathon. Their park in BIBE wasn’t far from ours and we were happy to spend time with them and their 3 doggies (for memory sake – PB, Koko, Flbl). 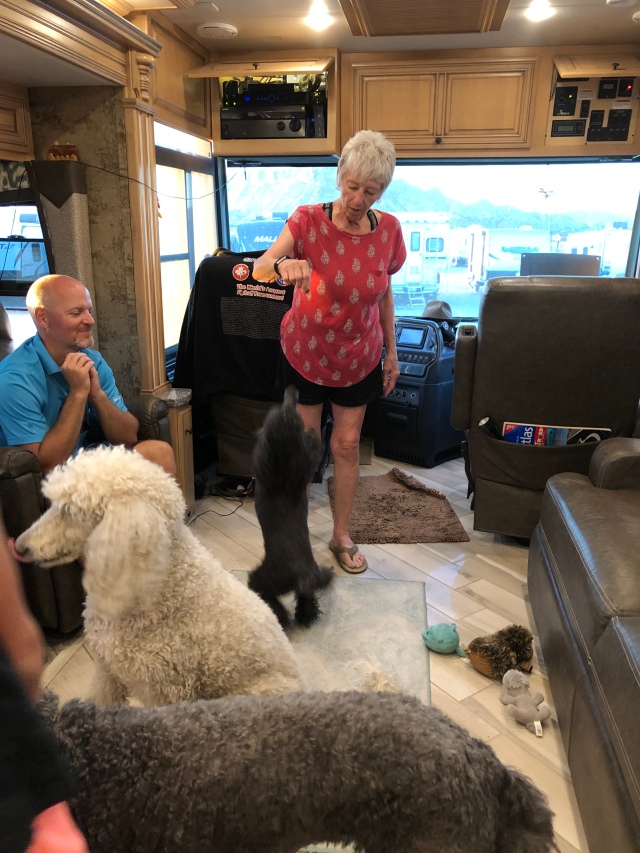 Ms Judy is German and her potato pancakes, applesauce, and sausages were so tasty that all 3 kids asked for 2nds!

The moment we were done eating a wind picked up like crazy – the likes of which I’ve only seen on the Wizard of Oz. So we were outta there!

Such an amazing Sunday!!!! I will never forget that afternoon in the Hot Springs and Rio Grande. It was truly such a gift and an amazing memory.

There was an error retrieving images from Instagram. An attempt will be remade in a few minutes.