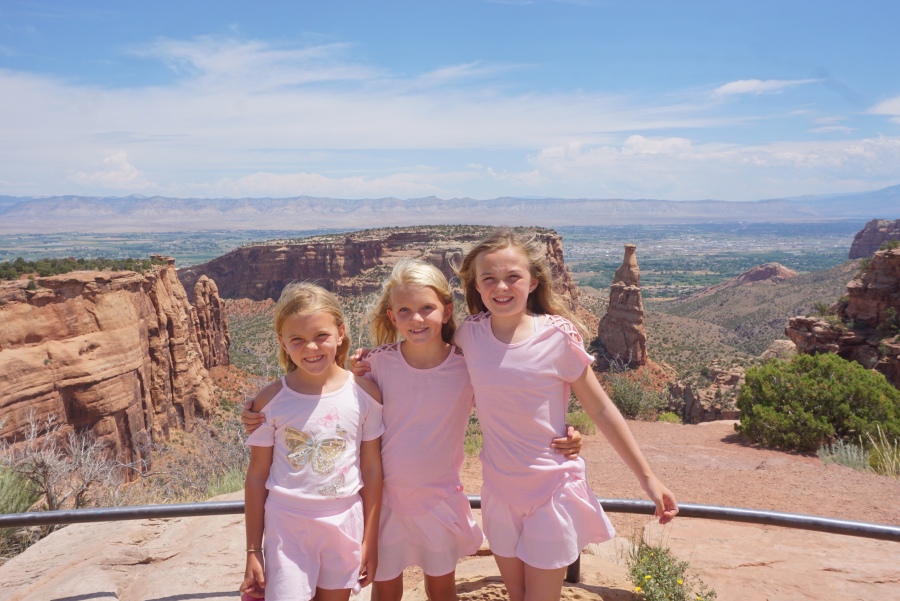 As I type, cousin IE & MomMom are on their way back to NJ and the kids are in the “bunk house” – aka their room –  sniffling away.  We had such a great week with them and we are truly thankful they made a way to come meet us!

The Lil Rookies have clearly been in the desert for a long time. Ha! As soon as they saw this grass at the hotel they were like flies on a picnic potato salad. 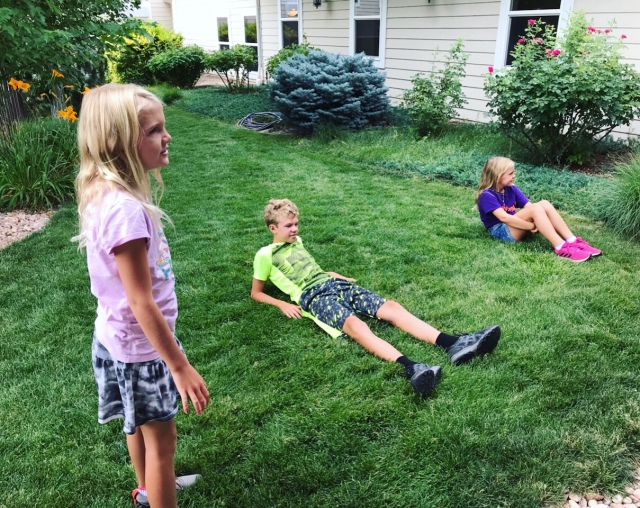 We loved the hotel they stayed in. They could have stayed in Woody but it would have been cramped and B had to work all week so we were grateful for the hotel.

We checked in before they arrived so we could just enjoy the strong AC, big bed, and views. Oh it’s the little things haha. 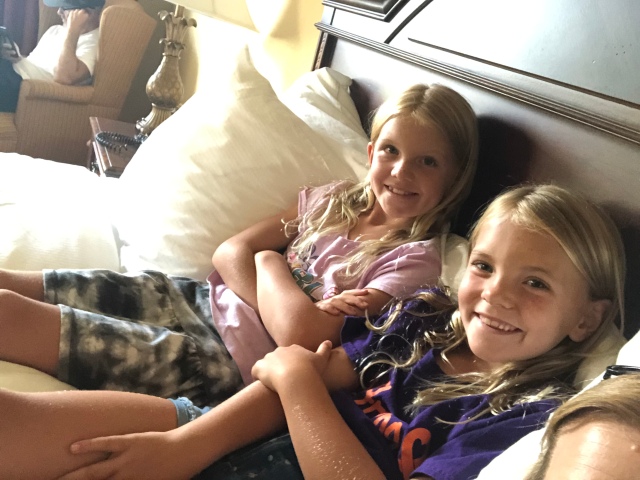 After picking them up late Thursday night and spending the day playing and catching up on Friday, we took them to their first National Monument!

The Colorado National Monument is visible from Grand Junction and Palisade where we are staying – but it looks sooo different when you actually enter the park and start climbing up.  From a distance it looks like it’s a flat face mountain,  but there’s actually so many monoliths/monuments and different rock formations.

The Monument is part of the Colorado Plateau that we’ve been exploring for weeks/months now (including the Grand Canyon, Arches, CanyonLands).  This monument (it’s not a national park but a national monument) is only 32 square miles. There just one road that goes from Grand Junction (East Entrance) to Fruita (West Entrance) so it’s a great one- day adventure.

We started at the Fruita entrance so we could go to the Visitor Center first.

We walked Alcove Nature Trail & Canyon Rim Trail although it took us 3 times longer than usual because the girls had so much catching up to do!   I tried my best to encourage them along knowing that every minute we wandered was a minute that it was rising in temperature haha.  Luckily we made it through those 2 hikes before it hit 100 degrees. Look at the cross-bedding on Alcove: 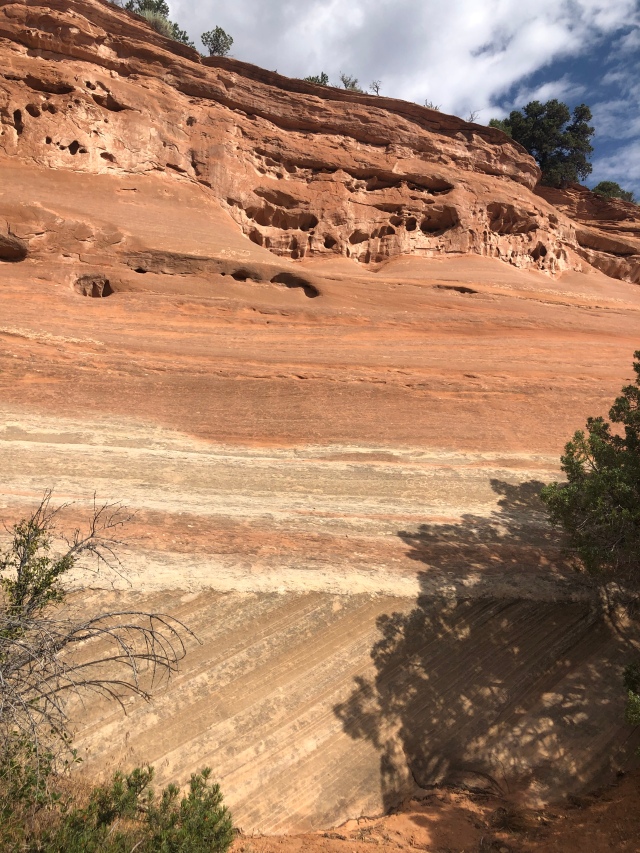 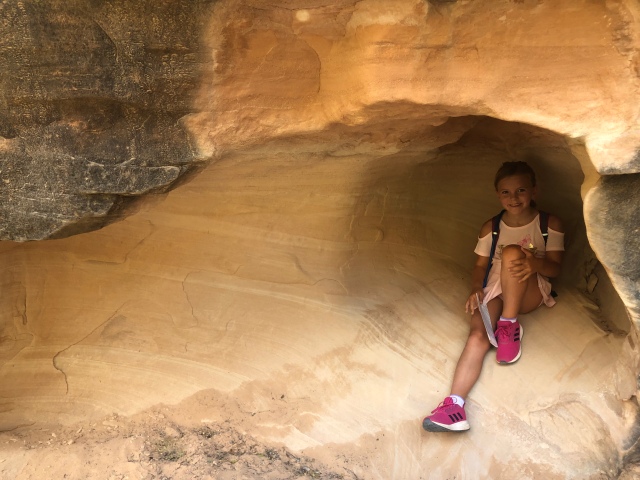 The rest of our time in the park we drove Rim Rock Drive and stopped at almost all the overlooks. 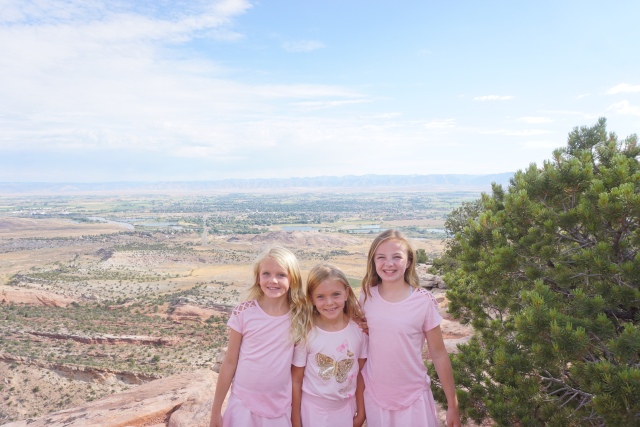 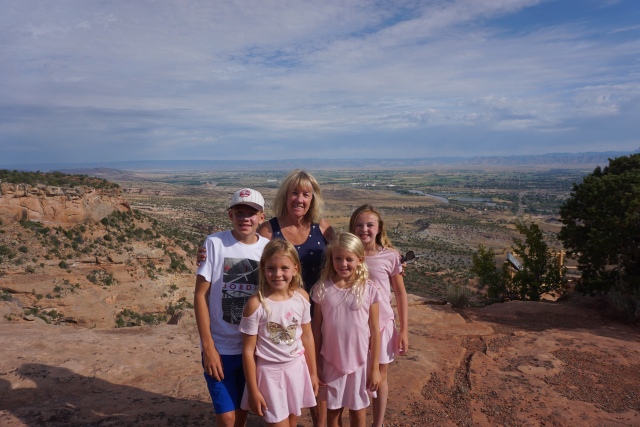 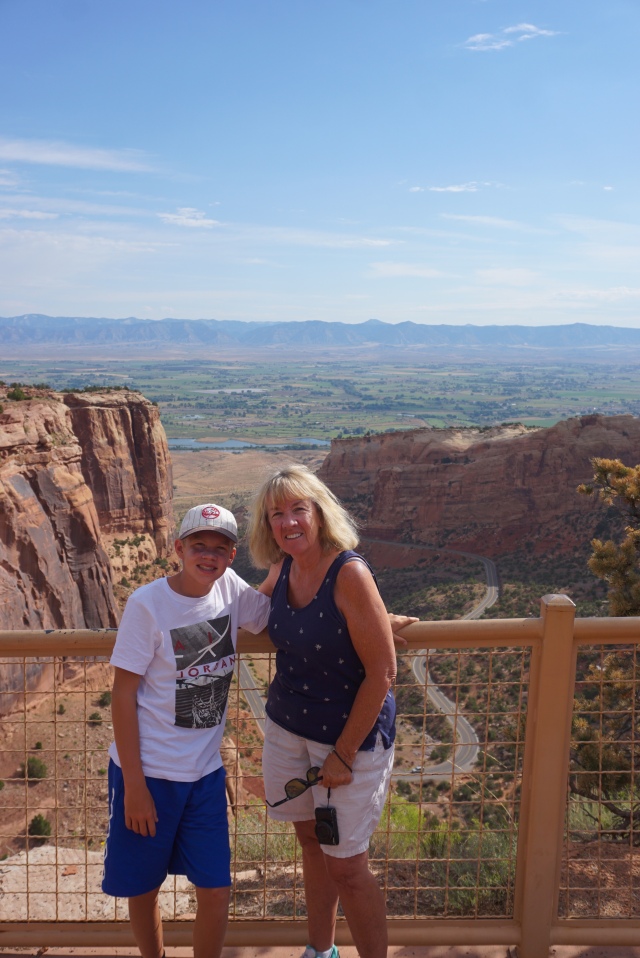 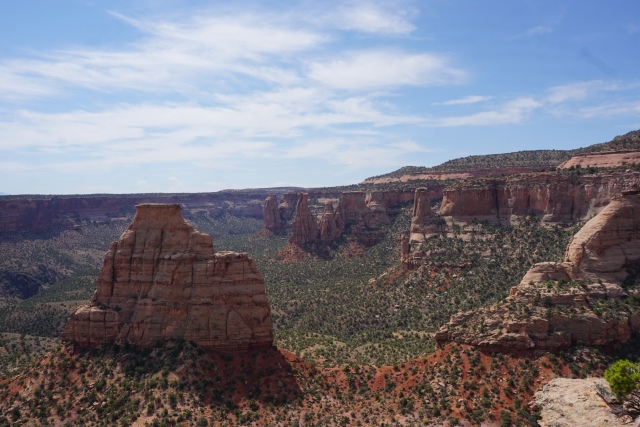 The kids loved Independence Monument where they learned about John Otto and how he lived in the canyon and urged the citizens of Grand Junction to bombard DC politicians with letters to support making the area a National Monument.  In 1911 his dream came true and the monument was established.  He was the park’s caretaker until 1927 with a salary of $1 a month.  His dreams to have a wife sure did not come true.  He married Beatrice Farmham at the base of Independence Monument but she only lasted a few weeks.  His insistence to live in a tent close to his animals was the end of that.  Every year people continue Otto’s tradition and climb up 450 foot Independence Monument to fly the American Flag.  This has been done every year since 1911!  “Otto’s Route” is still used today for climbers.  Pretty cool huh!? The flag is on that center monument there: 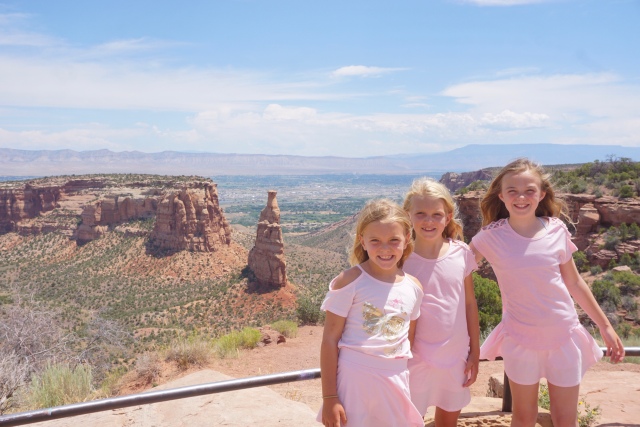 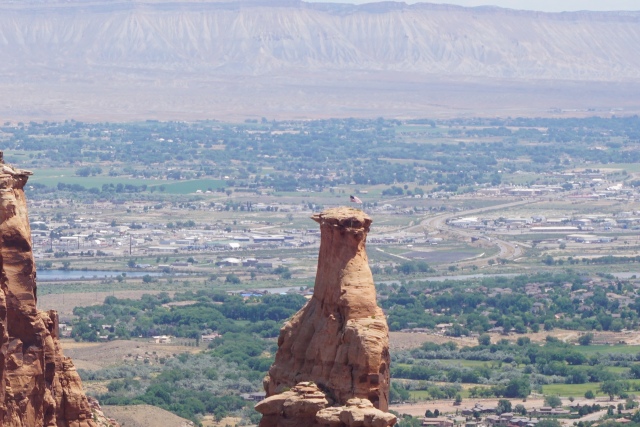 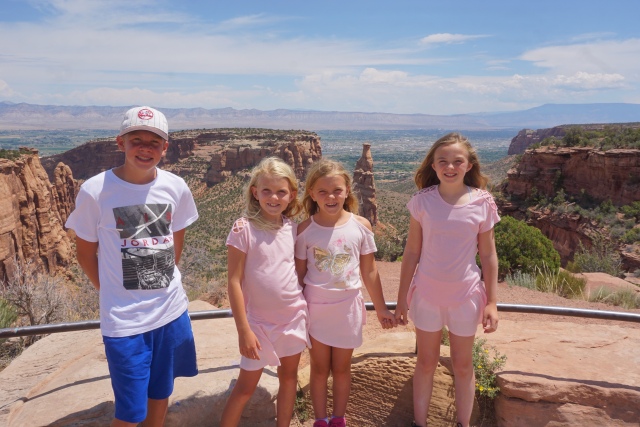 The kids also enjoyed this little adventure below. We still can’t figure out if the tunnel was something historical – but at the other end after crawling through, we found out it’s currently a drainage area for when and if it actually rains the water would go under the road not over. 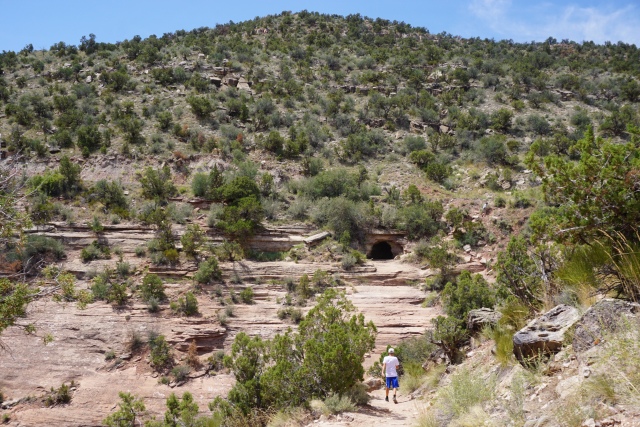 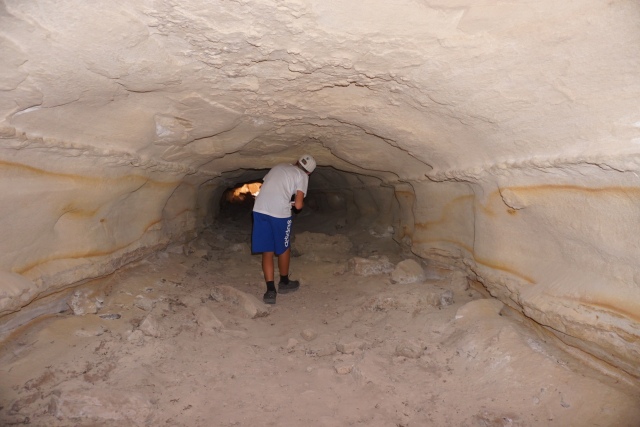 We saw bighorn sheep! IE is a lot like her aunt. She kept calling them mountain goats like I do haha . We didn’t capture the group of them but did catch this little guy: 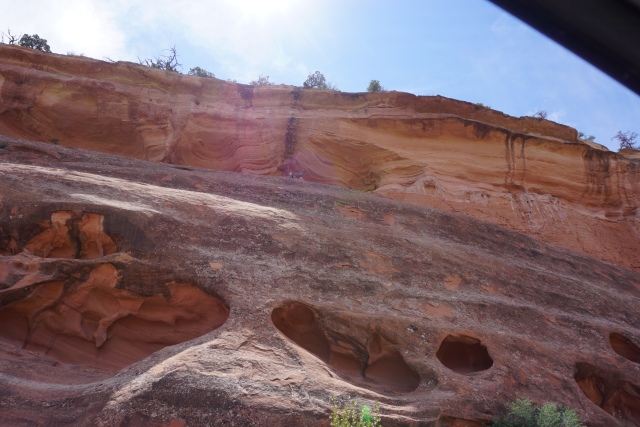 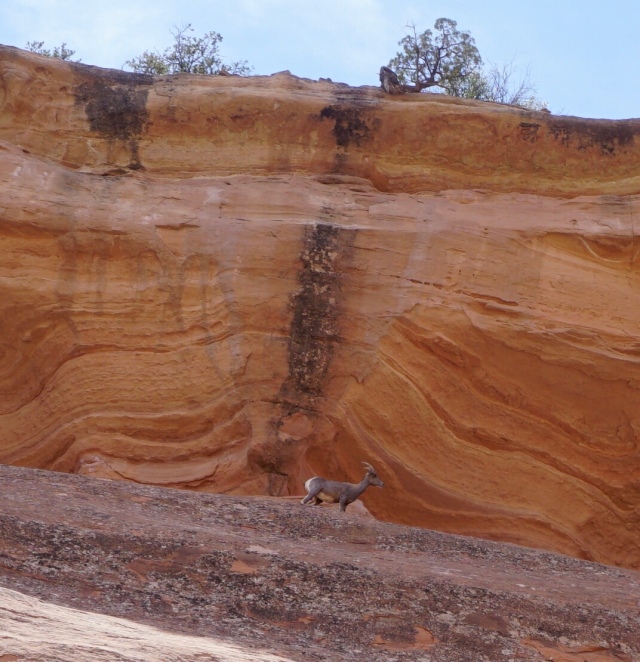 We were so happy to give IE and MomMom a glimpse of what we have been up to. IE earned her first Jr Ranger Badge woohoo!

I am pretty certain the kids won’t remember anything about this Monument except that IE and MomMom were with them. And that’s okay 😊 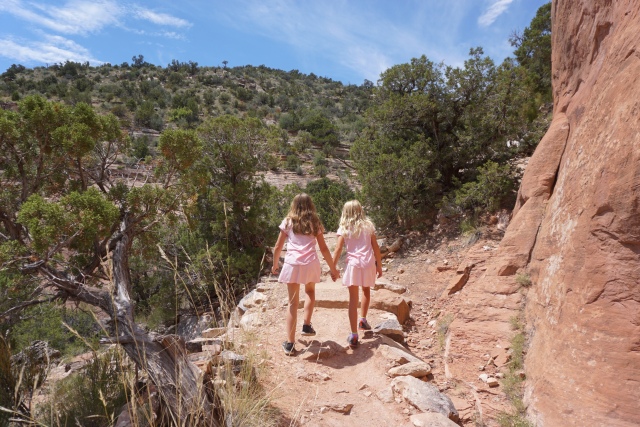